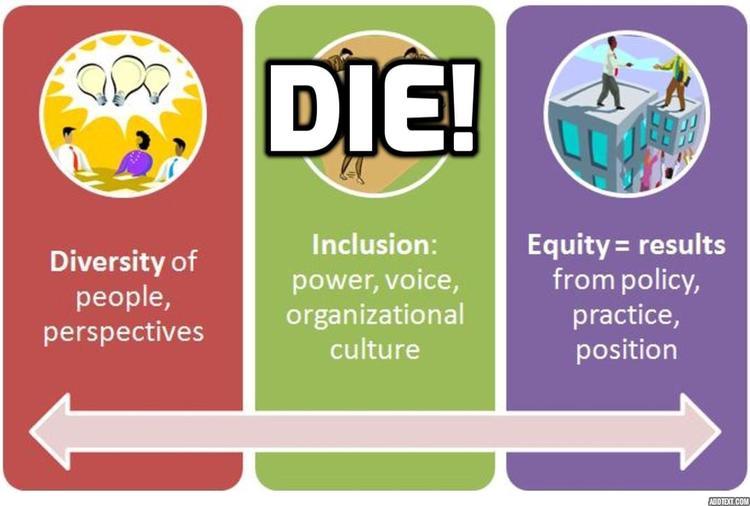 Which Do You Prefer: A Vaccine or Diversity / Inclusion / Equity (DIE)?

The great majority of vaccine projects fail, but it’s heartening that six quite different coronavirus potential vaccines have already been injected into people, while 83 additional different vaccine trials are in the planning stages.

At the moment, Oxford University’s Jenner Institute appears to be in the lead. So far, this has elicited one intersectional objection, from the Huffington Post:

OPINION
23/04/2020
I Teach At Oxford, But I Don’t Want It To Win The Coronavirus Vaccine Race
The story will be clear: China, once again, has unleashed a threat to civilisation. But the best brains of the UK have saved the world, Dr Emily Cousens writes.

But that appears to be a minority opinion. Instead, most human beings would be fine with Oxford toffs inventing a vaccine so long as they don’t, personally, have to die.

What’s striking is that the western world’s recent obsession with Diversity, Inclusion, and Equity (DIE) has apparently vanished while the possibility that you or I might literally die from the coronavirus occupies the mind.

At the moment, the entire world appears to be hoping that somebody with ancestors tracing to Eurasia will innovate a vaccine, even though we have been lectured throughout this century that innovation depends upon enough warm bodies with genetic roots in Africa, the New World, or Australia being given lucrative sinecures.

Doing searches on Google News finds remarkably few sites demanding at the moment that we DIE in order to not create a vaccine that makes the Intersectional feel bad about their capabilities.

It’s almost as if Diversity, Inclusion, Equity (DIE) were just a grift that can be dispensed with when life gets very real.

Funny how that works …