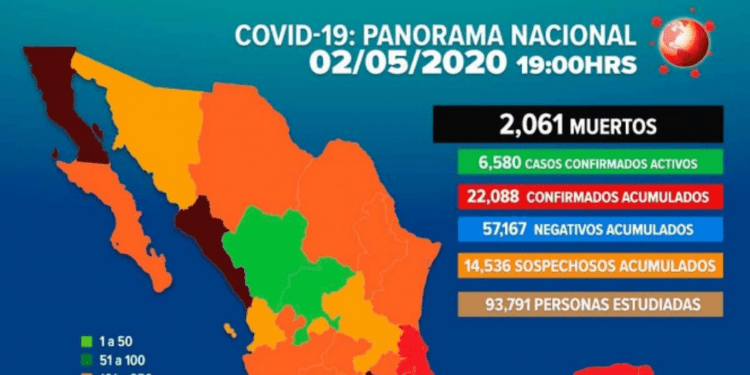 Mexico's Excelsior reported on May 2 that the coronavirus death count in Mexico has passed 2000.

Why is the death count of 2,000 significant?

In a March Mexican cabinet meeting, it was predicted that 2,000 was the maximum amount of Mexicans who would die of COVID-19.   Now that figure has been surpassed.

This cabinet meeting was not a public one, however, Salvador Garcia Soto, a columnist for El Universal, wrote that the cabinet discussed Mexico’s racial identity relative to the virus  [Esperan hasta 2 mil muertes por Covid-19 en México (“Up to 2,000 Deaths from Covid-19 Expected in Mexico”), March 23, 2020]. That must mean Garcia had a secret source within the cabinet.

Coronavirus Point Man Hugo Lopez-Gatell and his Chinese Virus team, along with other officials, presented an estimate of how many Mexicans they expected to die from coronavirus: as low as 400 and high as 2,000.  They saw their 400-2,000 range as an optimistic scenario.

In that report, the cabinet health specialists commented to the president that “genetically, the Mexican race has greater resistance to this type of virus than other races such as the European” and they argued that it has to do with the Mexican genome and with mestizaje [the mixture of Spaniards and Indians which produced Mexico’s mestizo majority].  That’s why they expected that that would influence the impact that the new coronavirus would have among the Mexican population.

The medical team was wrong about the amount of deaths, but does that mean they were wrong about mestizos being more resistant to the virus?  Not necessarily, but it may be too early to tell. After all, COVID-19 entered Mexico a month after it entered the United States.

To get a good idea as to whether or not the theory is true, the research would have to 1)exclude other factors, such as age and previous health status, and 2) compare coronavirus rates of Mexican mestizos, whites and Indians.

It would also be valuable to compare research from other Latin American countries with similar demographics as Mexico.