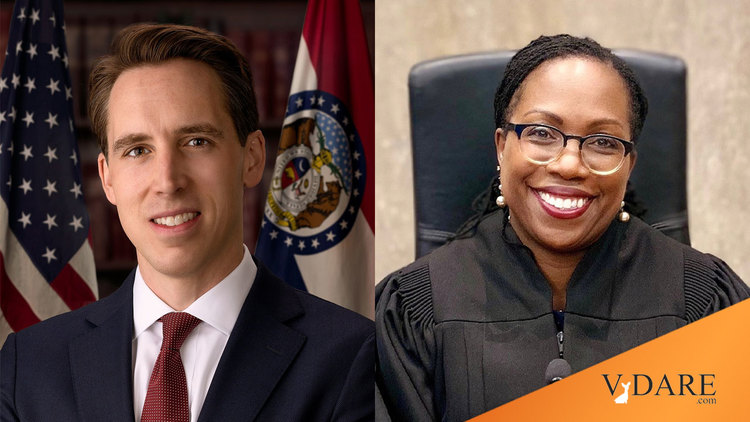 Confirmation hearings just started for Judge Ketanji Brown Jackson’s potential elevation to the Supreme Court. Since the Democrats have (marginal) control of the Senate, it seems highly likely that she will be confirmed. However, if just one Democrat says “No” to this hardened radical, the GOP just might be able to sink her nomination and cause President Biden a humiliating defeat.

MUST WATCH: Senator @HawleyMO runs through seven cases where Ketanji Brown Jackson was lenient on pedophiles, giving them sentences that were far below the federal guidelines. pic.twitter.com/9msrXDkJ9Z

I think Senator Hawley is employing a strategy to expose Judge Jackson’s radicalism. The official position of the ACLU is that the government has the power to criminalize the manufacturing of child pornography, but not the possession of it. As a member of the Judiciary Committee, Senator Hawley will have the opportunity to question Judge Jackson. I think he may be planning on asking her if she supports the ACLU’s position on child pornography.

The problem for Judge Jackson is that canons of judicial ethics prohibit Judges from answering how they would rule on a potential case. She may have to defer answering that question—even if she disagrees with the ACLU. If she does, Senator Hawley may be able to convince at least one Democrat to vote “No.” The Democratic Party has become increasingly radical, but they are still not quite at the level of wanting to legalize child pornography.

Do I think this will work (assuming it is even his strategy)? Probably not, but it is at least worth a shot.