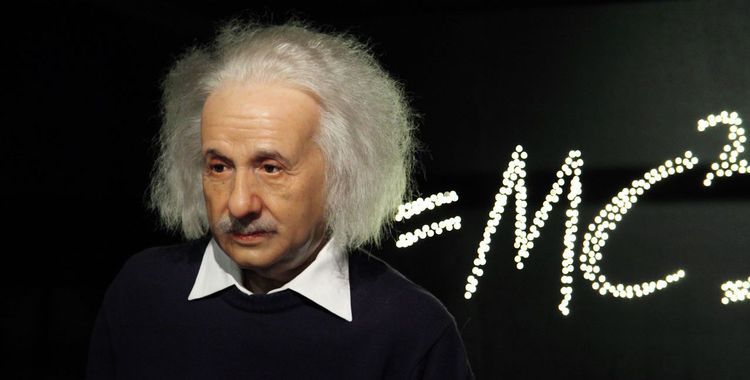 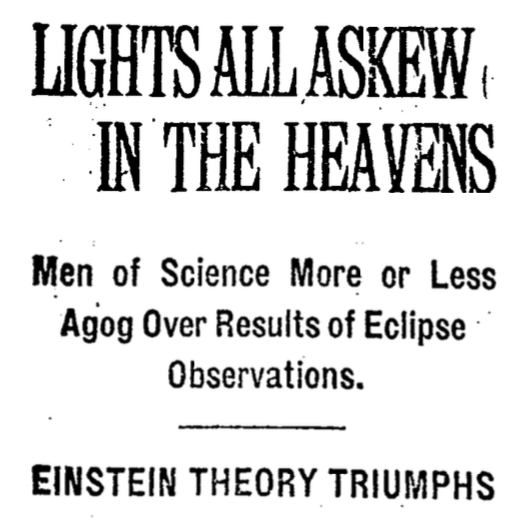 In Einstein’s General Theory of Relativity, he said he couldn’t prove his theory was true, but … here were some experiments that other scientists could do that potentially could disprove his theory. The first such experiment was carried out by Arthur Eddington during the 1919 solar eclipse: he found, as Einstein had predicted, that you could see a star that was behind the occluded disk of the sun because the sun curved space.

In truth, taking astronomical measurements from the deck of a heaving ship in the South Atlantic wasn’t easy, so who really knows what Eddington came up with. But for 100 years since, people have been carrying out experiments proposed by Einstein, and keep failing to falsify his General Theory

As far as I know, Einstein’s idea of proposing ways to falsify his own scientific theory was a huge step forward in the philosophy of science. Karl Popper’s falsificationist theory of science would seem to basically be an extrapolation.

So, today, Einstein’s General Theory seems like a heroic monument to science, both on the direct and, perhaps especially, meta levels.

Interestingly, however, General Relativity didn’t seem like that in 1919, as Paul Johnson pointed out in Modern Times.

I’ve never been sure if I believed Johnson’s framing device of Eddington’s experiment introducing a relativistic mindset.

But now, some guy on Twitter vidicated Johnson’s approach.

David Chapman, who has a doctorate in AI from MIT, tweets that Eddington’s confirmation of Einstein was seen at the time as profoundly destabilizing, the death of rationalism:

Retroactively, after decades of difficult work by top philosophers, we understand this test of relativity as a triumph of the scientific worldview.

But, at the time:

This is not at all how science was understood in 1900. Science in those days found absolute, eternal, exact Truths.

The “successively better theories” story, taught in high school now, was invented in the 20th century precisely to account for relativity and quantum. …

For decades, general relativity was popularly felt as a disastrous disconfirmation of the scientific worldview. Rationalism collapsed as a source of certainty, and never fully recovered.

One could date the first crack of postmodernity to 100 years ago today. …

It is now difficult to comprehend how completely and shockingly relativity shattered rationalism.

For millennia, Euclid’s _Elements_ was *the* eternal source of absolute, unquestionable Truth about the fundamental nature of reality.

Relativity showed it was just false.

Cultural historians take Newtonian physics as the foundation of the European Enlightenment. It provided a complete understanding of the material world, with perfect certainty.

Modernity consists of extending that paradigm to all realms of meaning. ..

The 1919 announcement that SCIENTISTS PROVE WORLD MAKES NO SENSE was a Big Deal in a way we have forgotten. It was misappropriated as a totem of nebulosity in general. Anti-rationalists seized it as justification for the general relativity of all truth.