In Stockton, California, the local defenders of diversity in the Lincoln Unified School District (contact) have drawn a line: snowmen good, poinsettias bad.

The word “diversity” apparently appeared prominently in the district’s memo to teachers. One report mentions the big Sikh temple located in the city. 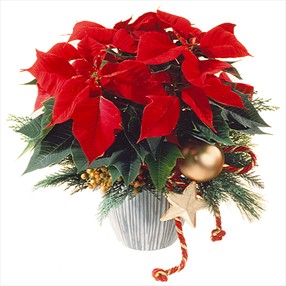 Weren’t Sikhs aware that they were immigrating to a historically Christian nation, where millions of citizens normally celebrate Christmas?

Of course, diverse immigrants are a handy excuse for liberal loonies to bash traditional customs and assimilation. The anti-Christmas extremists like to claim the separation of church and state as a pretext for their behavior, but I don’t recall Santa Claus appearing anywhere in the New Testament.

Nevertheless, Somali Muslims managed to get a visiting Santa kicked out of a local Head Start program in Minnesota last year — Somali Diversity Crushes Santa Claus. Maybe the school officials feared Somali violence as a reaction and decided to play it safe.

STOCKTON – A letter sent to Lincoln Unified teachers that may have sounded like it came from the Grinch who stole Christmas has become fodder for how far school districts are willing to go in recognizing the separation of church and state.

The letter from the Lincoln Unified district office told teachers not to display Santa Claus or poinsettias in order to maintain sensitivity toward those who don’t celebrate Christmas.

That message was downplayed on Friday by the union leadership representing teachers.

Lincoln Unified teachers union President Janet Olstead, also a classroom instructor, said she has not received any complaints about the district’s letter asking teachers to keep holiday decorations seasonal – and without a strong religious message.

According to a News 10 television report Thursday, a letter distributed to the staff at Claudia Landeen Elementary School stated that teachers should not have decorations in their rooms, including Santa Claus and poinsettias. Snowmen and snowflakes, however, were considered acceptable.

Olstead said the letter was not widespread or condemning of teacher practices.

“I think there was a misinterpretation of the letter,” Olstead said. “I think the letter was meant for teachers to be mindful not to go overboard in one (religious) direction or the other. I haven’t been informed of anybody being asked to take down a decoration.”

It is common policy at San Joaquin County school districts to ask their teachers to be aware of different cultures in their classroom.

A Stockton Unified spokeswoman said teachers in her district are asked to be balanced in their presentation of holiday cheer.

Manteca Unified Superintendent Jason Messer said the only policy his district employs is to make sure Christmas trees placed in classrooms are fire-safe.

“If a parent complains, we’ll take it through a process,” he said. “But we don’t discourage the celebration of any holiday. We have a school nurse that has a program with the dreidel song every year too.”

Lodi Unified Superintendent Cathy Nichols-Washer said the district’s policy is “classroom decorations and customs may express seasonal themes that are not religious in nature.”

The school district office lobby in Lodi is home to a fully decorated Christmas tree. Nichols-Washer said decisions on how to implement the district’s “seasonal theme” policy is for school sites to decide. Lodi Unified does strive to be diverse and sensitive when needed, she added.

“Other than the policy, there is no formal district direction,” she said via email.

Some in the corporate world try to capitalize on the holiday. Starbucks Coffee Co. stores nationwide offer a Christmas blend.

The issue is one that has long troubled retired Lodi pastor Ken Owen. In past years, Owen has approached trustees at most school districts in the county to encourage them to allow religious themes through his Keep Christ in Christmas campaign. Owen said he has ended his campaign for personal health reasons, but his opinions have not changed regarding school policies guided by the separation of church and state.

“It’s discriminating against Christians, that’s what it is,” Owen said. “It’s continuing to deteriorate. Christ is not welcome in our classrooms.”

Nichols-Washer said the issue is not just about religion, but some students may be in need of sensitivity to their socioeconomic status.

“We also need to be mindful that many of our students come from families of poverty; therefore, the ‘Santa Claus brings toys’ aspect of the season may not be appropriate for different reasons,” she said.