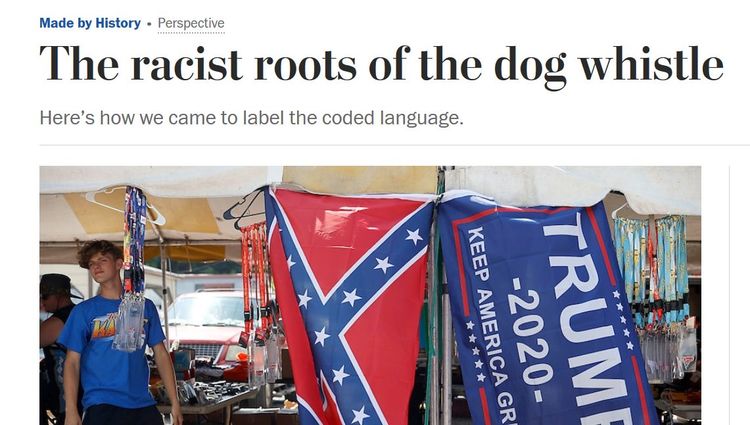 WaPo: Of Course Trump's Dog-Whistles Are Racist: The Dog-Whistle Was Invented By Sir Francis Galton!

Earlier:  "They'll Think You're Signaling"! Dog-Whistles From Goldwater To Reagan To Palin

The racist roots of the dog whistle

By Adam R. Shapiro
Adam R. Shapiro is a historian of science and technology. He’s the author of “Trying Biology: The Scopes Trial Textbooks, and the Antievolution Movement in American Schools.”
August 21, 2020 at 3:00 a.m.

The term “racist dog whistle” is not new. But President Trump may represent the perfection of “dog-whistle politics,” using phrases, symbols and tweets to create plausible deniability whenever his policies seem too overtly racist.

Because Trump, with his perfect 800 on the SAT Verbal test, is obviously a verbal genius who precisely calibrates every utterance that comes out of his mouth so his followers know exactly what he is implying but his enemies can never quite prove it, but they just know. Or something like that …

… The device we now think of as a dog whistle was designed by Francis Galton, whose most famous work was inventing the term “eugenics” and creating a science of racial differences and race “improvement.”

… The use of the original “dog whistles” was shaped by racial dynamics in the United States. Hunting dogs didn’t just pursue foxes or birds. Before the Civil War, they were frequently used to track enslaved Black people. Dogs trained to hunt humans were highly prized among enslavers and the slave catchers they employed.

Even after slavery’s abolition, dogs continued to reinforce the racial politics of the Jim Crow South. Trained dog packs, used in activities like fox hunting, became a manifestation of White Southern elites’ pretensions toward aristocracy and nostalgia for the era of slavery.

It was not until about 1940 that the dog whistle, a tool for signaling and training hunting dogs, and Galton’s ultrasonic whistle — mainstay of the psychology lab — were combined into a single technology. The first patent was filed for a dog whistle “of [sufficiently] high frequency so that it may be heard by a dog but not heard by the human ear.”

The “silent” dog whistle changed which kinds of dogs were being whistle-trained. No longer were whistles primarily a tool for hunting over long distances. They were for suburban dogs — an increasingly salient feature of the racially segregated and suburbanizing American landscape. As ads for Purina whistles promised, these couldn’t disturb your neighbors.

Silent dog whistles also became a tool for training police dogs. Though connections between dogs and policing in America go back to the days of slave catchers, the role of dogs in modern policing gained wider use in the 1950s. According to one 1961 study, “the public has fully accepted the canine corps. There were only three complaints reported, one not described and the other two stemming from the feeling among Negroes that dogs are used in their areas disproportionately to the need for them.” The overpolicing of Black neighborhoods — including with dogs — was rooted in ideas about criminality, race and intelligence and morals that go straight back to Galton and the psychologists he influenced.

The introduction of dogs to modern policing took hold just in time for the animals to feature in iconic and violent images of the struggle for civil rights, including police dogs attacking peaceful Black protesters in Birmingham, Ala., in 1963. President Trump evoked this scene earlier this year when he threatened Black Lives Matter protesters with “vicious dogs,” a comment that only avoided the “racist dog whistle” label because its motives seemed obvious.

It was in this context that the silent dog whistle, an invention that unified racist scientific equipment with racist cultures of dog hunting, became a technology that facilitated violent opposition to civil rights.

… Morin’s column was written just weeks after the broadcast of the infamous Willie Horton campaign ad, perhaps the clearest example of a racist dog whistle in American politics before Trump.

I’m starting to get the impression that today’s enlightened, like Chairman Mao and Papa Doc Duvalier before them, are working themselves up toward banning dogs.

Don’t dogs have “masters”? Yet, most dogs seem to love their masters. What’s wrong with them? Whose side are they on anyway?

Do you know who are the real running dogs of white monopoly capitalism?