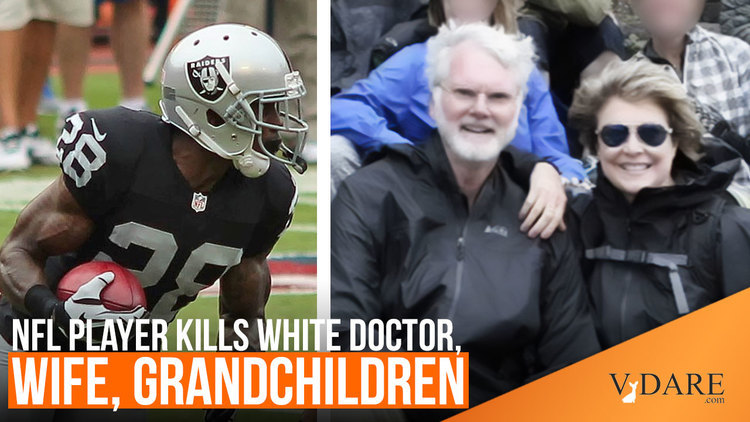 WaPo: Never Mind The NFL Cornerback's Mass Shooting Of Whites, Think About The Marginalized Instead

When mass shootings target a marginalized group, trauma ripples through those communities https://t.co/3IXr4KXZaf

Of all the mass shootings of the last half dozen years, why are those four specified? Because the killers where white and the victims were black (Charleston), Jewish (Pittsburgh), Latino (El Paso), and 3/4ths Asian (Atlanta).

On the other hand, whites are not marginalized so any mass shootings of whites, such as the mass murder the day before in South Carolina of a distinguished white doctor, his wife, and two small grandchildren by an ex-NFL cornerback (whose race you can guess by his occupation) is not traumatizing.

Any white person who is not completely insouciant about the question of whether all the anti-white expressed hate in the media might have anything to do with all the anti-white violence is racist. We’re the media, we couldn’t possibly have made any disastrous mistakes of judgment in declaring the Racial Reckoning. Only racists might wonder if we have blood on our hands over 2020’s 30% increase in murders. The First Amendment means that it’s un-American to criticize the institutional media, whereas social media is a hive of treachery that must be dealt with.