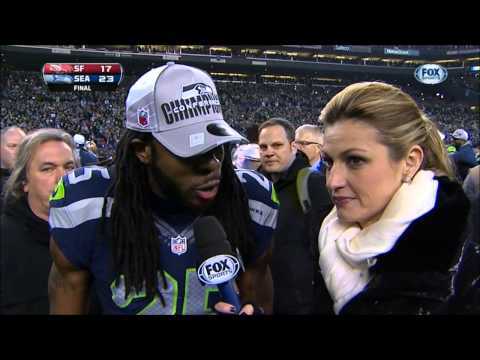 Sports Illustrated had an interesting article last spring on discrimination against white cornerbacks in the NFL:

The White Cornerback: NFL players past and present open up about race at the position

The NFL is a melting pot, with Liberian linebackers, Australian punters, German receivers and Cameroonian tackles. But the diversity ends at one position—it’s been 14 years since a white player has regularly started at cornerback.

A lot of the article focuses on a white guy named Donny Lisowksi who only got in one preseason game for Seattle a few years ago, despite being extremely fast: 4.38 seconds in the 40 yard dash, compared to 4.56 seconds for Seattle’s All-Pro cornerback Richard Sherman.

I like this article because I’ve spent a fair amount of time thinking about Richard Sherman in regard to the Cornerback Question. Sherman, one of the highest paid defensive players in the NFL, is a bright guy who is quite quotable. For example, after he broke up a Colin Kaepernick pass to go to the Super Bowl:

I suspect the WWE would love to have Sherman wrestle and do trash talk mic work after his NFL career is done.

On the other hand, it’s not clear that Sherman is a uniquely great athlete, despite all his success at the NFL position most demanding of “athleticism.”

I saw Richard Sherman play in high school in the division championship game for Compton Dominguez vs. Sherman Oaks of Notre Dame (my old school). On the first play of the game, Notre Dame’s white quarterback Garrett Green ran a draw and outraced Sherman (and the rest of Compton’s Division I-bound secondary) 80 yards for a touchdown.

Compton went on to crush Notre Dame 41-14, although Sherman didn’t stand out in that game. As a wide receiver on offense, Sherman averaged a huge 30.7 yards per each of his 28 receptions that season. But Compton had a whole bunch of outstanding athletes, including another (minor) NFL player Jeron Johnson, and didn’t need to involve Sherman in the offense during that championship game.

In contrast, Green was pretty much a one man team, at quarterback and cornerback, for outgunned Notre Dame. (After a self-sacrificing career as USC’s 3rd string QB, he’s now a senior VP for a real estate development firm.)

That spring Sherman went on to win the triple jump in the California state track meet and be voted California high school athlete of the year (runner-up was Colin Kaepernick).

“I loved Donny as a player and a teammate,” Sherman, now a four-time Pro Bowler, says of Lisowski’s short stint with Seattle. “But in the end I think it was just a matter of [the Seahawks] preferring taller corners.”

Sherman played with a white cornerback at Stanford for whom height wasn’t an issue. Mark Mueller’s wispy, vascular appendages looked like Usain Bolt’s dipped in milk; he was the type of guy who could roll out of bed, throw himself a lob off the blacktop, rock it between his knees and reverse dunk it. “Mark was a better athlete than I was, no question,” says Sherman. “All his measurables were better than mine.”

Although Mueller played running back and linebacker at his suburban Denver high school, Jim Harbaugh and his Stanford staff projected the teenager as a cornerback, the spot where Mueller would one day be replaced, in a manner, by a converted receiver named Richard Sherman. Competing against each other in practice from 2007 through ’10, the two young men—Mueller the corner and Sherman the wideout—were identical beneath their epidermises. Wide wingspan, thin legs, narrow hips, long strides. Mueller ran sprints for the Cardinal track team at 6′ 3″ and 200 pounds. His best 60-meter time was 6.96—a hair slower than Lisowski’s PR of 6.89 but faster than the 7.06 Sherman ran for Stanford.

“Sherm was a lot hungrier to get to the NFL than I was,” says Mueller, now an assistant track coach at Duke, “but the main difference was injuries. I tore my labrum in both shoulders, broke my toe, had six concussions, two herniated disks. … My college career is borderline embarrassing because I was always in the training room. The coaches began to see me as this fragile track guy, which I guess I kind of am.”

I suspect that injury susceptibility is a racial difference almost as important as speed. My impression is that sportswriters before blacks took over big time sports assumed that speed correlated with slenderness. It seems like a pretty natural thing among whites, and it was pretty surprising when blacks had a lower correlation between speed and skinniness.

But what if Mueller’s finicky physique had held up, and what if he’d been afforded the chance to make the mistakes that Sherman made in his first year at corner? (Even Sherman concedes that his 2009 season at Stanford was not exactly a lesson in lockdown.) Might Mueller be doing what Sherman is doing now? Asked another way: What if a clone of the game’s best cornerback—except this clone is more athletic—were whipped into shape, gotten up to speed and dropped into an NFL lineup? “Sure, I think about it,” Mueller says. “I could make those plays. But I’m not a big fan of what-ifs.”

Injuries. Position preferences. Social mores. “There isn’t one single reason it is the way it is,” Sherman says of the league’s predilection for melanin at his position. “Nobody’s stopping anybody.”

“People used to tell me that all the time: Try safety.” Pete Ittersagen says. “Like it’s easy. So you want me to put on 25 pounds and play inside the box? Nah. I’m a corner.”

Dustin Fox would disagree with that assessment. Though his size and his stats suggested that cornerback was Fox’s natural position, the NFL insisted it was not. “I started at corner for four years at Ohio State [from 2001 through ‘04], won a national title, was named All–Big Ten—and I get to the NFL and suddenly I’m a safety,” he says. “At 5′ 11″, 185 pounds. After I ran a 4.43 at the combine. Why?” …

Brian Davis was faster than Lisowski, if the stories his peers tell are true. Davis, the last white guy to play cornerback regularly in the NFL before Sehorn and Kaesviharn came along, started 15 games for the Redskins in 1988 and ’89 (opposite Hall of Famer Darrell Green) and was a backup for three other teams before he retired in ’95. If Lisowski resembled an impassioned orc at his pro day, then Davis in his prime was a bronzed Jeff Spicoli who didn’t know what a pro day was.

Neither his surfer hair nor his 6′ 2″ knife of a body have changed much since Davis, now 53, jogged onto the field for Super Bowl XXII. That day, as Doug Williams became the first black quarterback to hoist the Lombardi Trophy, Davis became the last white cornerback to do so. Twenty-six years would pass before Russell Wilson equaled Williams’s achievement, in 2014, during which time black backup QBs won seven Super Bowl rings. Meanwhile, other than Sehorn (who allowed a 38-yard TD to receiver Brandon Stokely in the Giants’ Super Bowl XXXV loss to the Ravens—“We call that white on white crime,” says retired cornerback Dustin Fox), no white cornerback has even suited up for the NFL’s championship game.

“If you’re a white corner, you’re guilty until proven innocent,” Davis explains during a break from his job as a trainer in his hometown of Phoenix. He has worked in the past with MMA champions and 2008 Olympic wrestling gold medalist Henry Cejudo, among others, and he doesn’t know how to pull a punch. “I’m not going to be politically correct about this,” he warns. “It comes down to this: How many white guys are f------ fast enough to play cornerback in the NFL? Very, very few. It just doesn’t show up as often in white bodies. Even if I’m a white coach or a coach who’s pulling for [the white cornerback], I’m still thinking, ‘Why is he here? I don’t want him. He can’t run, he can’t jump, he’s too damn nice.’ That’s another stereotype, by the way: nice, polite. [NFL coaches] want a f—— baller.”

Cornerback is the terminate-with-extreme-prejudice position.

Even at the pinnacle of Davis’s career, when he capped Washington’s Super Bowl–record 35-point second quarter by intercepting John Elway just before halftime, Davis was overlooked. ABC’s Dan Dierdorf (and the ensuing NFL Films documentary about the game) called him Tony Davis. Brian Davis was not wired to care about such minor details, even though the mistake did lend him a whiff of ethnicity. Besides, he endured worse disrespect on the field.

“I heard every kind of white boy comment you can think of,” he says. In particular he remembers an older, gray-haired man in Oakland who used to chain-smoke on the sideline during warmups. “He’d be over there laughing, saying, ‘Look, it’s the great white buffalo! Hey, you’re the long-lost white buffalo!’ I was like, Who is this guy? How’d he get down here? My teammates told me, ‘That’s Fred Biletnikoff.’ ”

Not a lot of white solidarity in the NFL.