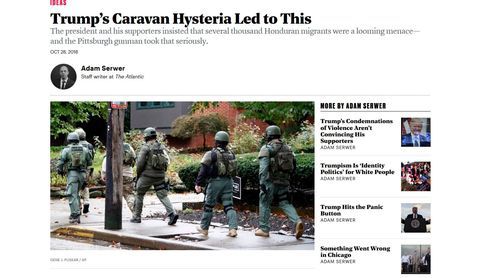 The churlish reception President Trump received in Pittsburgh [Shooting victim’s family shuns President Trump in Pittsburgh as top officials decline to join him, by Moriah Balingit, Avi Selk and Mark Berman, Washington Post, October 30, 2018], although gracefully mitigated by Tree Of Life rabbi Jeffrey Myers [Rabbi Gives Classy Response After CNN Asks if Trump Is Welcome to the Synagogue After Shooting, by Julio Rosas, IJR.com, October 29, 2018], for which Myers has paid a price, is ominously typical of Democrat/ Main Stream Media strategy: barely waiting for the blood to dry, they are blaming the horrific tragedy on patriot concerns about the illegal alien caravan in order to suppress debate.

The alleged synagogue shooter, Robert Bowers, actually hated Donald Trump as a sell-out to the Jews. But that didn’t dissuade the Left from pursuing a politicized theory for why the shooting took place: Bowers reportedly targeted the Pittsburgh synagogue because of its association with the Hebrew Immigrant Aid Society (HIAS), a group that supports the caravan and Treason Lobby immigration policies in general. [Accused Pittsburgh gunman posted online about HIAS, an agency known for work with refugees, by Farnoush Amri, NBC News, October 28, 2018]. Therefore, no one should discuss the migrant caravan, no one should call it an invasion, and, most importantly, no one should oppose it. To do otherwise is to announce you’re a white nationalist in league with Robert Bowers. If Trump and Fox News had not “fearmongered” about the migrant caravan, the shooting would have never taken place.

Thus The Atlantic’s Adam Serwer wrote that “Trump’s caravan hysteria sparked a massacre.” Serwer was outraged that the President would tweet so much about the migrants seeking to barge into America. Serwer claimed they are “refugees fleeing violence in their home country”—even though the majority of the migrants are military-age males. He went on to attack Republicans, conservative pundits, and even Main Stream Media outlets for abetting “Trump’s effort to make the midterm election a referendum on the caravan” [Trump’s Caravan Hysteria Led to This, by Adam Serwer, The Atlantic, October 28, 2018]

In his conclusion, Serwer [Email him] baldly asserts that the undue attention to thousands of migrants trying to invade the homeland was the inspiration for Saturday’s violence:

The apparent spark for the worst anti-Semitic massacre in American history was a racist hoax inflamed by a U.S. president seeking to help his party win a midterm election. There is no political gesture, no public statement, and no alteration in rhetoric or behavior that will change this fact. The shooter might have found a different reason to act on a different day. But he chose to act on Saturday, and he apparently chose to act in response to a political fiction that the president himself chose to spread and that his followers chose to amplify.

Serwer implied that everyone who talked about the caravan is responsible for the massacre and implies that they should face serious punishment:

Serwer was not alone in this opinion. The New York Times ran a “news analysis” Monday that claimed “Trump-fed conspiracies” about the migrant caravan led to the shooting. “[T]here is clear overlap between the hatred and delusion that drove this lethal behavior and the paranoia and misinformation surrounding the caravan,” Jeremy Peters [Tweet him] wrote in a piece not labeled “Opinion” [How Trump-Fed Conspiracies About Migrant Caravan Intersect With Deadly Hatred, New York Times, October 29, 2018]

Peters then spends an inordinate amount of time gasping at conservative personalities and outlets devoting coverage to the caravan. He is incensed that they would at times slightly exaggerate the size of the invasion and mention the role billionaire George Soros may have in funding it. The NYT reporter, of course, believes any criticism of Soros is anti-Semitic dogwhistling. But the he admits that immigration appears to be a “winning strategy” for the president—betraying the ulterior motives of journalists who wish to see the caravan disappear from headlines.

The Washington Post also published a similar “analysis” of the alleged connection between caravan coverage and the synagogue massacre. The WaPo piece specifically focused in on how theories that Soros may be involved in the caravan “fueled homicidal rage.” Reporter Joel Achenbach [Tweet him] strongly implied that criticism of Soros is anti-Semitic and should have no place in mainstream discourse [A conspiracy theory about George Soros and a migrant caravan inspired horror, by Joel Achenbach, Washington Post, October 28, 2018]

You can draw a direct line from all of the vitriol and hate rhetoric about the caravan that’s some 2,000 miles away from our border and the gunman in Pittsburgh, who referenced that, and somehow turned it into an attack on Jews

Even though MSM outlets have been quick to throw around the term “conspiracy theory” when it comes to the migrant caravan, all outlets admit that HIAS is actively involved in refugee resettlement and pushing for more liberal immigration policies. As Refugee Resettlement Watch’s Ann Corcoran has said, “based on my informal assessment going back several years, HIAS is the most politically active of the resettlement contractors and has been dogging Donald Trump unrelentingly since the 2016 Presidential campaign.” And former HIAS CEO Leonard S. Glickman once unguardedly said, regarding his organization’s increasing import of non-Jewish Third Worlders, “The more diverse American society is the safer [Jews] are.”'[Community Questioning 'Open Door', by Nacha Cattan, Forward, November 29, 2002

Yet, these journalists still insist it’s a “conspiracy theory” to blame them for America’s immigration woes. Weird.

Leftist journalists were already plainly rattled about caravan coverage before the synagogue massacre and, in their tolerant and diverse way, urged MSM outlets to ignore it. Vox’s Matthew Yglesias [Email him] called it a “nonsense” story ginned up by conservative media [The hack gap: how and why conservative nonsense dominates American politics, Vox, October 23, 2018].

MSNBC host Chris Hayes tried to mock the “palpable desperation” of conservative focus on the caravan as a shameless ploy to better their chances in the midterms. But, awkwardly, Hayes’s own parent network had an image of the caravan as its header photo on Twitter. [Chris Hayes wins the self-own shot/chaser of the week, by Greg P., Twitchy, October 25, 2018]

The reality: Leftists know the caravan is a real story that alienates average Americans from the Open Borders agenda. While every guest on CNN and MSNBC claims to see the migrants as poor refugees who should be welcomed with open arms, Democrats who have to appeal to middle Americans are less sure.

Thus Senator Claire McCaskill, who is behind in the polls in her re-election race, sounds distinctly more like Trump on the issue than her progressive colleagues, telling Fox News Monday: “I think the president has to use every tool he has at his disposal, and [I] 100% back him up on that, whether it is turning them back because we are not equipped to handle that many asylum claims into our system.” [McCaskill: Trump ‘Has to Use Every Tool,’ Including Possibly Turning Back Migrant Caravan, by Ian Hanchett, Breitbart News, October 29, 2018]

Middle Americans know that the caravan is a real story that shows the horrifying reality of inviting the whole world to your country. Anyone with eyes can see that Leftist policies will allow millions of young men into the country on the phony pretext they’re “fleeing violence and poverty.” Footage of the caravan illustrates this fact more effectively than any study. The MSM’s claim this is not a “real story” look ridiculous when the same press insists that white people calling the cops on disruptive blacks and obvious hate hoaxes are real news.

Democrats know they are losing on immigration and that the issue is a winner for Republicans. Their only hope: to dredge up accusations of racism and anti-Semitism. The MSM is happy to bludgeon the public with the censorious message that talk of the caravan is off-limits. Only the worst of the worst have a problem with it! Immigration is great! Diversity is our strength!

Remarkably, Trump still refuses to bow to their demands. He continues to warn of the dangers of the caravan, telling Laura Ingraham on that “we’re going to build tent cities” to solve the catch-and release problem. [Laura Ingraham Interviews Donald Trump on Fox's The Ingraham Angle,October 29, 2018]

He’s the president (Thank God!), and the MSM will have to cover what he says. Ultimately, as long as he holds firm, there’s nothing Leftist journalists can do to silence talk of the caravan except whine.