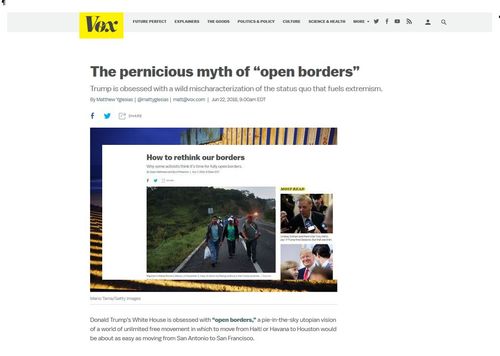 VOX On Open Borders: It's A Right-wing Fantasy, Or Liberal Madness—Except When They're For It

Below, Steve Sailer blogged VOX Now That Election Is Over, Let's Talk About Open Borders, in response to Vox's How to rethink our borders | Why some activists think it’s time for fully open borders, By Dylan Matthews and Byrd Pinkerton, November 7, 2018.

Here's what Vox has said about "open borders" before--that it's made up by Trump and people like us.

Before Trump was elected, they published

[D]isappointed, if not surprised, at the visceral horror with which Bernie Sanders reacted to the idea when interviewed by my colleague Ezra Klein. "Open borders?" he interjected. "No, that's a Koch brothers proposal." The idea, he argued, is a right-wing scheme meant to flood the US with cheap labor and depress wages for native-born workers. "I think from a moral responsibility, we've got to work with the rest of the industrialized world to address the problems of international poverty," he conceded, "but you don't do that by making people in this country even poorer."

There are two problems with Sanders's view on this, one empirical and one moral. He's wrong about what the effects of an open-border policy would be on American workers, and he's wrong in treating Americans' lives as more valuable and worthy of concern than the lives of foreigners.

Sanders, for all his faults, knew that he was running for President of the US.