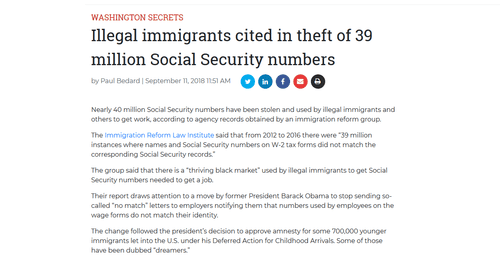 Nothing is more ridiculous than pretending the United States of America has "the rule of law." The collapse of our immigration laws spreads the virus of illegality into other areas. Now, a new report suggests almost 40 million Social Security numbers have been stolen by illegal immigrants.

Nearly 40 million Social Security numbers have been stolen and used by illegal immigrants and others to get work, according to agency records obtained by an immigration reform group.

The Immigration Reform Law Institute said that from 2012 to 2016 there were “39 million instances where names and Social Security numbers on W-2 tax forms did not match the corresponding Social Security records.”

The group said that there is a “thriving black market” used by illegal immigrants to get Social Security numbers needed to get a job.

This is not a victimless crime. Consider five possible things that someone can do once they steal your social security number.

Your Social Security number is the most important piece of personal information a bank needs when extending you credit or opening an account. With that number, a thief can get credit cards or loans, and when it comes time to repay them, they won’t, damaging your credit in the process. Those missed payments are tied to your Social Security number, so they’ll end up on your credit report and could impact your ability to apply for any type of loan or new account in the future.

Someone using your Social Security number could also undergo medical treatment, effectively tainting your medical records. Inaccurate medical records can have deadly consequences—for example, imagine what could happen if you received treatment based on a false history listing the wrong blood type. Additionally, it’s possible for thieves to poach your health insurance coverage, which could leave you in a bind when you need it.

Taxpayer identity theft is a growing problem. Identity thieves use stolen Social Security numbers to get a fraudulent refund, which then delays any refund the victim is rightfully owed. In 2016, the IRS identified $227 million lost in fraudulent tax returns, and this issue is bound to become even more problematic in the wake of massive data breaches like the 2017 Equifax hack.

So the sooner you file your taxes, the more likely you’ll get your refund before an identity thief has an opportunity to take advantage of your stolen identity. You’ll know someone stole your identity if your return is rejected as a duplicate—then you get to start the process of resolving the fraud and, if necessary, getting the refund you deserve.

A thief could also use your Social Security number to file for unemployment or Social Security benefits, depleting those resources and preventing you from accessing that assistance when you need it later on.

[5 ways an identity thief can use your social security number, by Christine DiGangi, Credit.com, November 2, 2017]

Yet who is going to do anything about it? For example, Kevin de Leon, currently challenging Dianne Feinstein in the California Senate race, practically bragged that "half of my family" had stolen Social Security numbers. Stealing Social Security numbers is perceived as less of a crime and more as a cost of doing business in Third World America. It will not stop unless there is strong action by the government to stop it, from the president on down.

That may or may not happen. But either way, I don't want to hear anymore Beltway Right hacks paying tribute to America's "rule of law." That's long since vanished and we shouldn't kid ourselves about it.