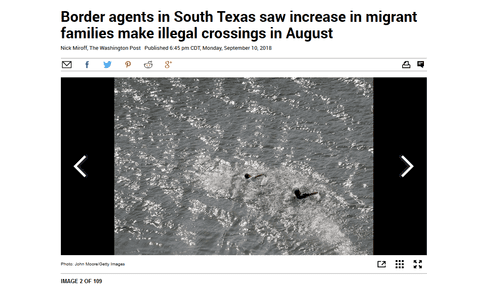 The Republican party is looking down the barrel of a wipeout in the midterm elections [Poll: Dems lead GOP by 14 points on generic House ballot, by Justin Wise, The Hill, September 12, 2018]. Obviously, the Republican strategy of laying back and pointing to the strong economy isn't going to cut it.

Of course, where there is crisis, there is opportunity. Illegal immigration is currently surging at the border and the current leadership is simply not doing enough to stop it

The number of Central American families arrested for entering the United States illegally surged again in August, according to a Trump administration official and Border Patrol agents in South Texas, an increase that comes as the president threatens a government shutdown to extract funding from Congress for a border wall.

U.S. Customs and Border Protection is expected to publish the most recent border arrest totals this week, and the numbers will be used to gauge the effect of President Donald Trump's order halting the separation of migrant parents from their children.

Agents working in the Rio Grande Valley, the nation's busiest corridor for illegal crossings, say they've seen more families turn themselves in and ask for asylum in recent weeks, a potential indication that the policy reversal has encouraged more Central Americans to head north.

"They keep coming and coming," said one agent. "There were some really large groups. Any time you have to use buses to come and pick them up, that's not a good sign."

Three major options present themselves. The first is for President Trump to have the government shut down until he can obtain money for his border wall. I'd say this is the least desirable outcome.

The second is for President Donald Trump to utter the two words that for some reason no one is saying right now. Those words are "remittance tax," a method that was explictly endorsed during the campaign and would fulfill his promise of having Mexico pay for the wall.
The third would be for President Trump to simply have the miltiary build the wall [President Trump Considering Using Military To Build Wall, by Scott Morefield, Daily Caller, September 8, 2018]. He floated the idea only a few days ago, but like many of the president's best ideas, it simply faded away after being broached.

Time is running out. Unless President Trump wants to be impeached by an unhinged Democratic Party, he needs to take strong action to shake up the midterms. And he can't rely on a GOP Congress that seemingly wants to lose.

If this is true, the blue wave will be a mere ripple. pic.twitter.com/2u5umkUgdW