When a crazy person commits mass murder because it's illegal to do anything about crazy people, the MSM emphasizes the danger of American gun rights for sane people.

If he's a white madman, they emphasize the danger of white people, and white racism.

But when a Muslim immigrant or a member of a disgruntled minority group, the MSM is willing to talk about his mental illness—while tiptoeing sensitively around his religion:

FRESNO, Calif. (KFSN) —As we learn more about the suspect in the UC-Merced stabbings through a two page manifesto, many are left wondering what was going on inside the mind of Faisal Mohammad.

And despite what law enforcement says, some are still questioning whether Mohammad's Muslim religion had anything to do with his attacks.

"But we now have a motive and we do know that he had a script that he was going to try and follow," Merced County Sheriff Vern Warnke said.

Mohammad's two page manifesto referenced Allah, but Warnke again made it clear that there is still no indication to believe the 18-year-old's attack was religiously motivated.

Warnke says we must remember that it's not right to group all Muslims together, especially when so many are gentle, loving people.

"We believe he's basically an American citizen, (a) student," said Seyed Ali Ghazvini, Imam at the Islamic Cultural Center of Fresno. "We believe he went through a lot of psychological issues and that maybe motivated him to be violent at this stage. We really do not see any connection with his faith or community." [ More] 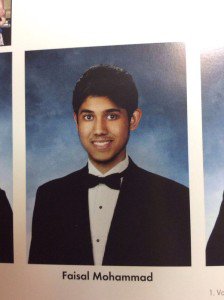 Well, I do—a guy named Mohammad stabbed a bunch of Americans and he had a plan to blow them up or burn them.And this guy named Mohammad was an American citizen himself, because he was born in America and went to a California high school. (See yearbook photo at right.) Via Heavy.com, we learn that "The Merced Sun Star reports that he was a native of Santa Clara, California. While the San Jose Mercury News reports that he was a graduate of Wilcox High School. "

There are two concepts we talk about here—Immigrant Mass Murder, and the Disgruntled Minority Massacre.

The first refers to the fact the that immigrants have an unusual and drastically underreported propensity to murder Americans. You frequently hear that murderers are "alienated"; immigrants come pre-alienated—they're aliens. Note that in colonial days, and during some foreign wars, even white people have been known to behave like this, but that's not underreported at all.

The other is what we call the Disgruntled Minority Massacre.

This is what happens when a minority employee, fired for cause or “dissed” in some way, comes back to his place of work and shoots up his usually white coworkers and supervisors. See Alton Nolen Not A Muslim Terrorist, But An American Phenomenon—116 People, Mostly Whites, Have Been Killed By 18 Black “Disgruntled Employees” In The Last 40 Years.

Mohammad was “dissed” in some way—kicked out of a study group—and responded like a disgruntled employee.(When you read about a "disgruntled" employee, it's an MSM  gun control story, but check what race the shooter and victims were.)

This is caused by hate. Not "fringe" hate—where a small magazine has unpopular opinions—but open, public, elite hate, taught by Social Studies teachers (Mohammad went to an American high school) and college professors (Mohammad was at the University of California.)

It's not a secret that the academy, the government (especially the President) and the MSM are preaching hate against whites. It's not "fringe" phenomenon,  but for the MSM it's too big to see.

However, the reason that the disgruntled minorities in American now include Muslims from the Indian subcontinent—who were born here and are citizens—is the result of Ted Kennedy's 1965 Immigration Act.