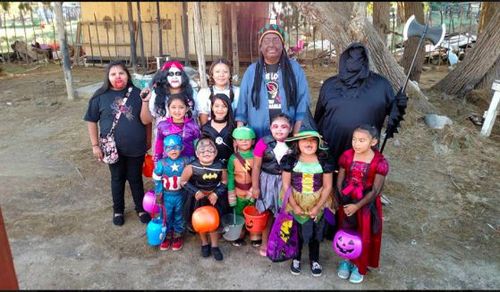 Hat tip to Dylan Gwinn at MRC Newsbuster for this one, it's rich:

Filed under the heading of, “You Just Can’t Make This Stuff Up,” I give you Terry Rambler, who is the Chairman of the San Carlos Apache Tribe in Arizona. Rambler was in DC recently to represent his tribe at Tribal Nations Conference. He is also a signatory to a pledge calling for the Washington Redskins to change their name, because racism.

With me so far? Good.

While in DC, Rambler decided to partake in Halloween festivities where he dressed up as Bob Marley. Okay, no worries. Perfectly acceptable Halloween costume. Except for a certain altering of the facial complexion that Rambler seems to have added on.

See if you can spot what it is. Here’s Rambler’s official professional photo:

At this point, Gwinn inserts an official photo of Chairman Rambler, you can see what he looks like.

Now here is Rambler in his Marley outfit:

Here it shows Rambler in his Bob Marley costume, in blackface.

You guessed it, the dreadlocks and hat are the difference. No, it’s his blackface. So, apparently it’s completely unacceptable for the Redskins to “offend” Native Americans by keeping their team name, yet it’s perfectly acceptable for Native Americans like Terry Rambler to offend the heck out of black people by wearing blackface. And just in case Rambler, or anyone who would defend him would try to say that black people aren’t offended by blackface, here are the results of a poll which asked black people that very question, and 55% said they are offended by blackface.

Or, looked at another way, over six times as many black people are offended by blackface as Native Americans are offended by the term Redskins. I’ll wait for Mr. Rambler to issue a public apology and demand that blackface forever be outlawed. He’ll do that right after the objective, apolitical media comes down on him for being a complete fraud and racial hypocrite.

Yes, I’m sure those things will happen.