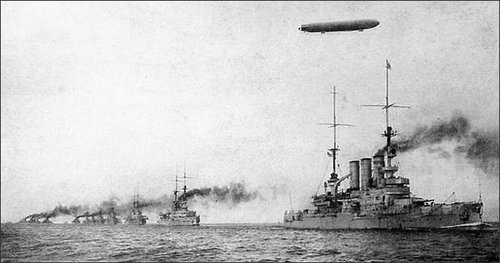 Thilo Sarrazin on the Need for Boats in the Water

From the translation in Gates of Vienna of an interview with Thilo Sarrazin, German central banker and author of the 2011 mega-seller Germany Abolishes Itself.

The translated interview from Die Zeit:

Thilo Sarrazin: “You Are Welcome to Ask Me What I Would Do if I Were Head of Frontex”[1]

Interview with Thilo Sarrazin by Tina Hildebrandt and Heinrich Wefing

Die Zeit: Except for perhaps North Korea, there are no border controls that function,

Die Zeit: Aside from the fact that we do not believe that billions of people will start out from Africa — if they did, no fence could keep them out.

Thilo Sarrazin: Yeah, you should study a little military history. The British managed in WWI — without radar and, until 1916 — without aerial reconnaissance, it sealed the entire North Sea against blockade runners. Feel free to ask me what I would do if I were head of Frontex and had the political and financial means.

Die Zeit: So what would you do?

Thilo Sarrazin: I would capture every ship. Even if it were a not merchant ship, I would set its passengers ashore at the exact spot on the African coast where they started and destroy the boat. You may be sure — after six weeks, no more of them would start out and there will be no more boat refugees.

Die Zeit: Let’s think that through. You have a militarily secured, impenetrable border around the Schengen area. What do you do with war refugees from Syria?

Thilo Sarrazin: War refugees from Iraq and Syria should for then most part be accommodated near their homeland, that is in Turkey, northern Iraq and Jordan. And then, when the war is over, they can most easily return.

Die Zeit: That is, we should take no war refugees into Europe?

Thilo Sarrazin: I believe, to put it positively, war refugees should be accommodated near the location of he conflict.

Die Zeit: And if that overwhelms these countries? The situation in Lebanon is explosive, Jordan is extremely fragile, war against the IS prevails in Iraq…

Thilo Sarrazin: Turkey, Iraq, Lebanon, Jordan are the neighbor states. And there are the Gulf States or Saudi Arabia which are stinking rich and have taken not one foreign Arab and co-religionist. They have the primary responsibility to keep order in their region.

The Australians and Israelis have shown that the naval equivalent of boots on the ground — boats in the water — works.