Keep the name Tyler Evans in mind as you watch the Senate amnesty extravaganza this week. He was a four-year-old boy killed by a drunk-driving illegal alien last August. The driver, Christian Javier Sanchez-Rubio, was a Mexican too inebriated to keep his vehicle in the right lane and as a result, an innocent little boy is dead and a loving family is devastated. 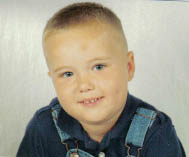 Sanchez-Rubio was recently sentenced to just 10 years in the West Virginia state penitentiary, with parole allowed. That sentence hardly seems adequate punishment for such a terrible crime.

Police said after his arrest that Sanchez-Rubio had provided a fake immigration document and a Mexican driver's license, both of which identified him as Jose Carlos Madrigal. He had worked at coal mines throughout Boone County, police said. [Illegal immigrant pleads guilty in wreck that killed 4-year-old boy, (Charleston) Daily Mail 5/30/07]

Sanchez-Rubio was apparently racing with another man, Marvin Navarro, when his Dodge Dakota truck plowed head-on into the car driven by Terry Evans, the father of Tyler. A younger son in the back seat, Micah, was injured but survived.

The family has posted a heart-breaking website in remembrance of the boy they lost — Tyler Lee Evans — with many pictures showing happy family life — Tyler on his pony Dorito, Tyler opening his Christmas presents, Tyler with his friends and little brother. It is tragic to see the pain caused to one family because the government refuses to enforce our borders. Every member of Congress should be required to look at it and all the other evidence of innocent citizens killed by illegal aliens.