Twitter, the LA Times, informs us, is abuzz because Charlie Hunnam, the British actor who played Jax Teller on “Sons of Anarchy,” will portray the American born Mexican dope kingpin, Edgar Valdez Villarreal.

British actor Hunnam is pictured above —the man wearing a "London" soccer shirt below right is the Mexican drug lord. Reports the Times:

People on social media however are voicing their concerns over Hunnam's role — because he's white English and would be playing someone of Mexican descent.

Their concerns follow suit with ideas raised by those in protest of the mostly white nominees of the Academy Awards, who've used the hashtag #OscarsSoWhite to discuss diversity in Tinseltown. [ Twitter says a white British actor playing a Mexican American is exactly what's wrong with Hollywood, By Tre'vell Anderson, January 25, 2016] 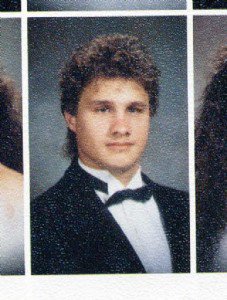 Villareal  looks pretty white to me—Wikipedia says that he's nicknamed "La Barbie" because, with "his light skin, green eyes, and facial features, he was compared to a Ken doll".  (See his yearbook picture, right.) But anyway, I didn’t hear anyone complain that John Seda, a Puerto Rican-American, played Italian-American war hero John Basilone in “The Pacific.”

Given that the left is so upset about a white guy playing a Mexican-American scumbag, let’s do this: Instead of casting Idris Elba as James Bond, let’s cast him as Charles Manson. Will that make everyone happy