In 2015, the state of Alabama and South Carolina both saw the Confederate flag come down. In New Orleans, Confederate monuments have been voted to be taken down by black controlled local governments.

In 2016, the city of Baltimore has also seen a black-controlled government decided to removed Confederate monuments.

Here's what the Baltimore Sun editorialized about the removal of the statues honoring Stonewall Jackson and Robert E. Lee (as well as a statue to a former Supreme Court Chief Justice who correctly noted in Dred Scott that blacks, free or slave, had no rights under the pre-Civil War US Constitution).

That, essentially, is what the recommendation of a commission tasked by Mayor Stephanie Rawlings-Blake to review Baltimore's Confederacy-related memorials amounts to: an evaluation of whether these statues on public land reflect who we are as a city. The statues of Supreme Court Chief Justice Roger B. Taney in Mt. Vernon Place and of Lee and Jackson in Wyman Park, which the commission recommended removing, do not. The Confederate Soldiers and Sailors Monument on Mount Royal Avenue and the Confederate Women's Monument on West University Parkway can with the addition of some well chosen signage.

We're not worried that removing the two monuments will erase the complicated history of Baltimore's role in the Civil War. We're worried that it will erase the embarrassing fact that so many for so long have practiced denial about the entirety of what the Confederacy stood for. Mayor Rawlings-Blake should take down these two statues, but she should leave in their place some acknowledgment of their existence and the circumstances of their creation and removal. Then Baltimore should seek out new art that better reflects who we are today.

"..Baltimore should seek out new art that better reflects who we are today," wrote the editors of the Baltimore Sun. 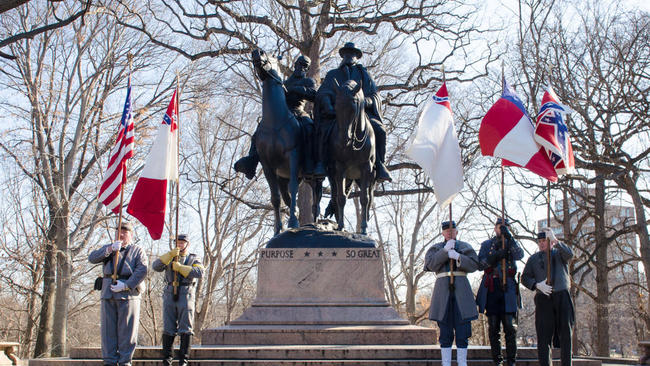 As a statue to feces eating drag queen is planned in Baltimore, the statues of Robert E. Lee and Stonewall Jackson are coming down...

Speak of the devil, and he will appear.

Here's proof that Baltimore isn't called The Monumental City for nothing.

A group of Divine fans are looking to put a monument to the late actor, drag queen, singer and counterculture figure near the Tyson Street site where his most notorious movie scene — the one at the end of John Waters' 1972 "Pink Flamingos" — was filmed.

"There will be pilgrimages to see this, I think," said Michal Makarovich, owner of the Hampden Junque store, who is spearheading the effort and has appeared on its behalf before Baltimore's Public Art Commission. "We think there will be an international fan base."

The proposed marble and concrete monument, roughly eight feet tall and three feet wide, would consist of an arch perched atop two classically Baltimore marble steps. A photo of Divine in full drag-queen makeup would stare out from the space under the arch, with a small bronze representation of the doggie doo he scooped up and ate at the end of "Pink Flamingos" resting on the top step. Waters' reminiscence on the days he and his cast and crew were shooting the infamous scene — "It was a magic day in our happy young lives" — would be inscribed under Divine's photo.

"I think it would be great," said neighborhood businessman Neal Foore, of Neal's The Hair Studio & Day Spa. "Anything to highlight Baltimore is good. Why not?"

Added Ray Grueninger, whose Robert's Key Service has been a fixture in the neighborhood since 1964, "I love the idea. John Waters and Divine and all, I knew them well."

More official voices, too, agree it's time Baltimore erected a permanent marker to its pride in Divine's, and Waters', cinematic accomplishments.

"The mayor thinks that the idea sounds divine," said Howard Libit, a spokesman for Mayor Stephanie Rawlings-Blake, "and looks forward to seeing more details on the proposal."

The monument, which supporters believe would cost between $50,000 and $100,000, would rest on the side of a house at the corner of Read and Tyson streets, on the western fringe of Mount Vernon. The actual scene, according to those who were there, was shot on a lot alongside a house in the 800 block of Tyson St., where Pat Moran — a long-standing member of the Waters troupe, known collectively as the Dreamlanders — was living at the time. The proposed site is actually across the street from the house, at a location (a blank wall) its designers thought would work better.

A statue to a homosexual, feces-eating, drag queen.

After all, it's 2016 right? Get those Confederate monuments and statues to white guys in Baltimore outta here! We have a feces-eating Divine to immortalize for his role in some crappy 1970s movie that took place in Charm City (proving this drag queen was the "filthiest person alive")!

Yes, editorial board of the Baltimore Sun, I think you've found the perfect art and individual to commemorate that accurately reflects who we are as a people today...