Race remains the prime issue of leftists who use it daily as a club against their political enemies from Washington to Ferguson MO. 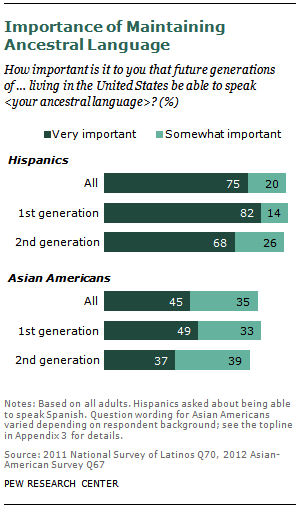 But as psychological identifiers go, language is more important. A person of any race can be a loyal and enthusiastic American, but someone who doesn’t speak English cannot be, because non-English speakers remain immersed in another culture.

Language carries culture, which is why Americans should reject Mexicanizers who demand that Spanish become equal to English in the United States — immigrants claiming such a right are invaders looking to overturn the American nation. The Pew graph shows an interesting difference between Hispanics and Asians regarding their willingness to integrate to American culture via language.

And Spanish is only one problem of diversity: some of the tens of thousands of dumped illegal alien kids from Central America don’t even speak Spanish, but US schools are supposed to teach a first-world curriculum to youngsters speaking indigenous languages (known in one school district as “Preliterate English Language Learners”).

Language is also the best measure of assimilation (which citizens still expect out of immigrants). The new Census data is therefore bad news for the national community, analyzed in a CIS report: One in Five U.S. Residents Speaks Foreign Language at Home, Record 61.8 million.

The Washington Times crunched the facts and their implications:

An eye-popping 20% of U.S. residents abandon English at home, By Stephen Dinan, The Washington Times, October 6, 2014

One-fifth of people in the U.S. speak a foreign language at home, according to a report being released Monday by the Center for Immigration Studies, which found Arabic and Urdu — the national language of Pakistan — among the fastest-growing.

The report found that nearly half of all California school-age children speak a language other than English at home, as do a third of Texans and Nevadans, according to the report, which is based on Census Bureau numbers.

Steven Camarota, co-author of the report, said the increase in foreign language speakers isn’t an accident, but rather the result of policy decisions that could be reversed by Congress.

“Allowing in over one million new legal immigrants a year and to a lesser extent tolerating illegal immigration has important implications for preserving a common language,” Mr. Camarota said. “For too long, we have given little consideration to whether continuing this level of immigration, mostly legal, hinders the assimilation of immigrants and their children.”

That is not likely to change. The number of foreign language speakers surged this summer with the illegal immigration of children from Central America.

Some of the children speak Mayan or other relatively rare indigenous languages, putting a strain on courts and schools.

In August alone, as the school year was opening, several districts reported major jumps in their expected student populations.

DeKalb County in Georgia reported 386 children placed with relatives or foster families in August, marking a 467 percent jump over its previous total for the year. Cook County in Illinois reported 215 more children, for a 313 percent jump in August.

With almost all the children of school age, and their parents or guardians required to enroll them, it means a major surge — sometimes several classrooms’ worth — of children. Many of the immigrant children have special needs, including a complete lack of English language skills, and some have never been in school.

Chicago Public Schools, the largest district in Cook County, said it has been receiving unaccompanied minors for years and has plans in place to accommodate them. A spokeswoman said school officials have not seen an unusual number this year.

A spokesman for DeKalb County, with one of the largest increases, said he would reply to questions but never answered multiple follow-up messages.

In Alexandria, Virginia, 231 children have been placed with families since January — marking an increase in the school-age population of 1.5 percent, or about 10 new classrooms’ worth of children this year. In August alone, the city received 26 more children, about a classroom’s worth — just as schools were about to start.

But city officials said they don’t feel a strain.

“We have instructional programs already in place. Our International Academy is designed to educate immigrant children,” said spokeswoman Helen Lloyd. “We are not allowed to ask immigration status. No school district is permitted to inquire as to whether a student is documented or undocumented. We are mandated to educate all.”

She said any increase in student population costs money but the district receives some federal assistance to fund education for children with limited English skills.

Officials in Prince George’s County, Maryland, said they are still waiting to see the financial impact.

“The revenue for the budget was based on last year’s student enrollment count, and therefore the number of new immigrant students we are consistently enrolling wasn’t necessarily captured,” said Colby R. White, the county schools’ chief financial officer. “It’s still too early in the school year to determine the impact they may have on the budget.

“As the year continues, midway through, some of our offices may realize that their funds have been affected by the significant increase of new immigrant students in the school system. Unless the county and state recognizes our potential financial strains, our budget remains,” Mr. White said.

About a fifth of school-age children in the District of Columbia speak a language other than English at home, Mr. Camarota’s report said. The rate is 16.7 percent in Maryland and 14.4 percent in Virginia. Those are all in the top half of the country in terms of percentage, but they still lag far behind California at 44.6 percent, Texas at 35 percent, Nevada at 33.3 percent and New Mexico at 31.3 percent.