The boilerplate Associated Press story about schools struggling to cope with illegal alien children dumped on them had little to recommend it, except for a fascinating new category of language instruction: Accelerating Preliterate English Language Learners (A.P.E.L.L) which appeared in a caption only.

AP caption: “In this photo taken Sept. 11, 2014, teacher Lori Ott, center, of Millsboro, Del., addresses students in the Accelerating Preliterate English Language Learners (A.P.E.L.L) class at the G.W. Career Educational Center in Frankford, Del. U.S. schools are now dealing with the fallout from the dramatic spike in the number of children and teenagers who crossed into the United States unaccompanied by family; the Supreme Court has ruled that they have an obligation to educate all students regardless of their immigration status. (AP Photo/Emily Varisco)” 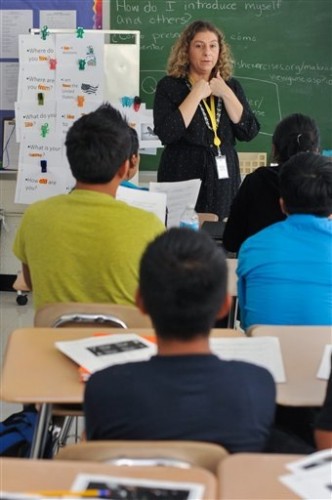 Presumably the kids in the A.P.E.L.L. class are Indians from Central America who speak indigenous languages rather than Spanish and/or have attended little or no school. What a fascinating challenge for teachers! At least the district has special classes for diverse foreigners and isn’t foisting them on American classrooms, holding back citizen kids.

Another item that shows up in an AP caption is the cost per student in the Indian River School District in Delaware: $12,000 but that important figure doesn’t show up in the article text.

Keep in mind that an estimated cost for this year’s education of the dumped alien kids nationwide is $761 million, but that doesn’t include all the other social welfare costs for food, housing, healthcare, psychological trauma counseling etc. for the foreign minors and family members.

Flophouse multilingual America, where preliterates are welcome! I feel so culturally enriched.

FRANKFORD, Del. (AP) — American schools are scrambling to provide services to the large number of children and teenagers who crossed the border alone in recent months.

Unaccompanied minors who made up the summer spike at the border have moved to communities of all sizes, in nearly every state, Federal data indicates, to live with a relative and await immigration decisions. The Supreme Court has ruled that schools have an obligation to educate all students regardless of their immigration status, so schools have become a safe haven for many of the tens of thousands of these young people mostly from central America living in limbo.

Delaware’s rural Sussex County has long attracted immigrants, partly because of work in chicken factories, and soybean and corn fields. The district’s population is more than one-quarter Hispanic, and for years has offered an early learning program for non-English speakers.

Still, officials were caught off guard by about 70 new students mostly from Guatemala — part of the wave crossing the border — enrolling last year, mostly at Sussex Central High School. The Indian River School District over the summer break quickly put together special classes for those needing extra English help.

On a recent school day, a group of these mostly Spanish-speaking teenage boys with styled spiky hair and high-top sneakers enthusiastically pecked away on hand-held tablets at the G.W. Carver Education Center, pausing to alert the teacher when stumped.

“If you don’t know what you’re supposed to write on the line, look at my examples, OK?” Lori Ott, their English language teacher, told one.

The students are eager but face barriers. Some can barely read or write in their native language.

The district’s goal is to get them assimilated — and eventually into a regular high school. There, they can earn a diploma, even if that means participating in adult education programs and going to school until they are 21.

“They just crave it, and they will come and ask questions,” Ott said. “How do you say this? And, how do you say that? They just participate and you can’t say enough about them.”

Donald Hattier, a school board member, said advance warning would have helped with planning. The federal government, he said, “just dropped this on us.” He wonders what’s next.

“The kids are still coming across the border. This problem has not been solved,” Hattier said.

Educators in Delaware and elsewhere say many of these students, who fled poverty and violence, have years-long gaps in schooling. For teenagers, learning in English can prove more difficult than for younger students. They also may be living with relatives or others they didn’t know, and the workings of an American school can be confusing.

Others experienced trauma, either in their home country or while crossing the border, and may need mental health help.

“It’s a new culture and they already feel that they are alone. … Some of them don’t have their parents here,” said English language instructor Alina Miron at Broadmoor High School in Baton Rouge, Louisiana. The school has about a dozen of these students enrolled

In districts like hers, the influx means hiring new English language instructors.

Two foundations donated money to the Oakland Unified School District in California to help fund a person to connect about 150 unaccompanied students with legal and social services; many didn’t have legal representation at immigration hearings.

“We feel that we have moral obligation to serve these students as long as they are in the United States,” said Troy Flint, a district spokesman. “Until their fate is decided, we’re responsible for ensuring they get an education and we embrace that opportunity.”

In Louisiana, the Broadmoor principal, Shalonda Simoneaux, said attending high school and learning English is a motivating factor for teenagers who want “want to blend in.”

“Whatever is being said, whatever is going on, they are really learning more from listening from other teenagers, even more so than from the teachers because it’s high school,” Simoneaux said.

For cash-strapped districts, providing for these students’ needs can be arduous, particularly if they arrive after student headcounts are taken to determine school funding.

In Miami, the school board voted to seek federal help after 300 foreign-born students, many from Honduras and traveling alone, enrolled toward the end of the last school year.

“We do have a very open heart and an open mind and any student who comes in our system, we’re going to give the most appropriate services that we can,” said the Delaware district’s superintendent, Susan Bunting.