The federal government continues to redistribute illegal alien children around the country where local schools are forced to pay for their special extended needs beyond mere classroom education. A recent estimate from FAIR puts the price tag at $761 million for this school year, but that amount does not include a myriad of associated costs.

The Washington Times did a front-page story for Thursday’s paper with some analysis of available information about how many kids and where in America they have been dumped. 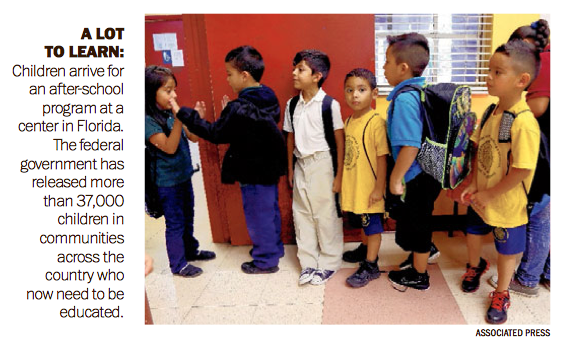 One county reports that up to half of the kids have experienced severe psychological trauma, which will show up in behavioral problems if it is not treated soon. However, it’s likely some of the traumatized kids speak some Indian language like Kanjobal, Quiche or Ixil and psychologists conversant in those languages are rare to none. So education is the least of the problems such schools face.

Central American children may be surging across the southwest border, but their effect is felt in school districts across the country — and nowhere more than in Alexandria, Virginia, where federal authorities this year placed 205 in a city of fewer than 150,000 people.

The children could increase the school-age population in the county by more than 1 percent, marking a significant influx of students likely to need intense help with English and other remedial education programs.

No longer just a border problem, the surge is now an issue for officials in communities throughout the country, where 126 counties or cities have at least 50 children, almost all of them school age, who have been placed with relatives or foster families within their jurisdictions.

“It challenges us every day,” said Scott Kizner, superintendent of schools in Harrisonburg, Virginia. “A lot of these children require special services.”

With the school year gearing up, districts are grappling with the situation. One county reported that as many as half of the children from the border surge have experienced major psychological trauma, either from gang violence in their home countries or hardships such as hunger and rape during their journey to the U.S.

“We have seen kids who are traumatized by violence or being witnesses to violence,” said Patricia Chiancone, an outreach counselor at the Prince George’s County Public Schools’ international student counseling office.

More common are educational struggles. School districts say the children lag behind in English language skills and trail their peers in core subjects.

Data released last month showed the U.S. Department of Health and Human Services had processed and released more than 37,000 children to sponsors in the first seven months this year. That doesn’t include several thousand other children still in shelters either run by the federal government or the 116 private or municipal facilities HHS is paying to house and care for the children.

HHS refuses to divulge those locations, though documents included in a government contract from the Homeland Security Department list 116 facilities that have been used to house children this year. Those facilities are responsible for feeding, educating and providing medical care to the youngsters.

Once the children are released to relatives or foster families, those sponsors take over responsibilities, including enrolling the children in schools.

Some locales say they barely notice the increase.

In Fairfax County, the 1,023 children placed over the first seven months of the year could account for almost half of the school district’s 2,200 new students this year. But officials said they aren’t keeping tabs.

“We are not enforcing immigration laws. That is not our function. We are educating children,” said Fairfax County Public Schools spokesman John Torre. “In our circumstance, I believe these students are being absorbed into the overall enrollment growth that we have seen for a number of years now.”

Other counties said they are being proactive.

“We’ve been working with these families all summer,” said Arlington Public Schools spokesman Frank Bellavia. He said the school district has been accustomed to large influxes of international students since the 1970s, when it had an influx of Mongolians.

This year, Mr. Bellavia said, Arlington has worked to make sure the students end up in appropriate classes, including special “accelerator” courses for those who don’t speak English.

“What we are finding is these students are coming in with gaps in their education. Some of them have no education,” said Mr. Bellavia. “So then we place them into an accelerated program where we can teach them English, and then we go from there.”

In Prince George’s County, 960 of the children have been placed with sponsors, and the school system has hired additional English-language instructors.

As many as half of the newcomers face psychological challenges, but their trauma has not led to an increase in violence in schools, Ms. Chiancone said. She said most of those dealing with psychological trauma become withdrawn or truant.

Most of the children are high school age, the county estimates. The school works in conjunction with county social service agencies to help the children and their families, Ms. Chiancone said.

Alexandria, a city tucked between Fairfax and Arlington counties and the District of Columbia, had 205 of the children placed with sponsors from January through July. That works out to more than 13 potential new students for every 1,000 school-age children — the highest ratio of any jurisdiction in the country.

School officials could not differentiate between unaccompanied minors released by federal authorities and other immigrant or international students, she said.

“We already have systems in place to deal with the students,” she said, noting the large number of students in the school district who don’t speak English.

“We have a basic set of processes we do for [English language learners],” said Ms. Alexander. “We have not had to make any adjustments at this point regarding budget.”

Two hours away in Harrisonburg, the 65 unaccompanied minors placed in the city represent the third-biggest per capita rate in the country.

Mr. Kizner, the superintendent, said about 5,500 children were enrolled on the first day of school. If all of the former unaccompanied minors in the city were enrolled, they would represent more than 1 percent of the school population.

His district has added two “newcomer” classes, bringing the total to seven classes in a district with eight schools.

The large number of students who do not speak English also requires multiple instructors in classrooms, including teachers who speak foreign languages and are licensed as English-language teachers.

The funding chiefly comes from state and local taxpayers.

“The reality is this: The federal government gives us basically no money to support these children, so the funding is coming from the state budget and mostly from the local budget,” Mr. Kizner said.

The surge shouldn’t be surprising to federal officials. Harrisonburg has had a surge of immigrants from Central America for more than a decade. Most are likely in the country illegally and work in the poultry and agricultural industries.

The children who are joining them have followed a well-worn path through Mexico to reach the U.S., where the federal government processes them and sends them to live with relatives, even if those relatives are in the country illegally.

Some lawmakers on Capitol Hill have said the federal government should deport the children quickly to dissuade others and reduce the impact on communities.

Immigrant rights advocates, though, point to conditions in the children’s home countries and say they should be allowed to stay and apply for legal status.

In the meantime, localities hope the federal government will at least provide funds to help cover the costs.

Federal officials already reimburse states and localities for housing illegal immigrant convicts in jails and prisons on the theory that those illegal immigrants would have been kept out of the country if the federal government were doing its job.

Asked about sending more money to localities, an HHS spokesman Wednesday referred questions to the Education Department, which said the children have a legal right to education. The department said schools can apply existing federal funds to help care for the children, but it did not identify any new sources of money.

Sen. John Cornyn, Texas Republican, and Rep. Henry Cuellar, Texas Democrat, introduced a bill this summer to reimburse local governments’ costs, but the legislation has stalled in the House and Senate.

A bill that passed the House would reimburse states for deploying their National Guard troops to the border, for law enforcement costs related to combating the surge, and for “humanitarian” costs incurred while caring for the children.

A separate Senate bill did not include any reimbursement for state and local costs.