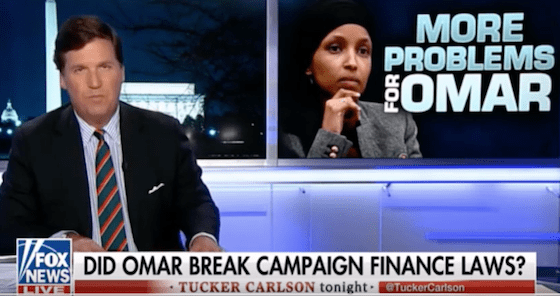 Representative Ilhan Omar is a prime example of the failure of America’s immigration system: the unfortunate emphasis on diversity has welcomed all sorts of groups and individuals that add nothing of value and actively hate this country. The worst of course are muslims: Their holy book instructs followers to conquer infidels around the world—the Koran has more than 100 verses promoting violence as part of the faith. Another strategy that has become more common is hijrah—immigration for the propagation of belief in Islam.

Along with the conquering comes the idea of Islamic superiority even though their societies are basket cases. 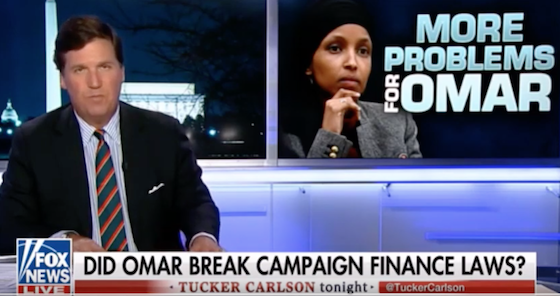 Omar seems to share the attitude of superiority, apparent in her disrespect for western law and culture. Born in Somalia, she lived with her family in a Kenya camp until the US rescued them as refugees in the mid-1990s, although there is evidence she entered by claiming relation to persons who were not her family. She apparently married her brother so he could scam his way into America. After so much generosity, Omar complains about the nation that rescued her and says living here is “an everyday assault.”

She can’t even be bothered to follow the laws of the Congress to which she was elected—unimportant infidel details, she may think.

Tucker Carlson investigated the latest news about Omar which concerns campaign finance violations that may have occurred during her affair with a married consultant:

A new complaint says Omar’s involvement with Mynett may have violated campaign finance laws. Peter Flaherty is Chairman of the National Legal and Policy Center, and he joins us tonight. Peter, thanks very much for coming on.

CARLSON: So typically, we don’t jump into people personal lives because, it’s kind of no one’s business, I think. But in this specific case, you have an allegation that a relationship like this could violate the law. How would that work?

FLAHERTY: Well, the problem here is that private actions may have resulted in violations of the law, the Federal Election Campaign Act. And in this case, you have Representative Ilhan Omar’s campaign paying for the travel of a political consultant with which it’s alleged that Representative Omar is having an affair.

Now, that opens the possibility that campaign funds are being used for personal purposes, which is strictly prohibited. And it has ended the careers of many of a politician.

You know, Representative Duncan Hunter, Republican from San Diego, he may be on his way to jail for using campaign funds for personal uses, including facilitating extramarital affairs.

CARLSON: Interesting. So what would you need to show that?

But in our complaint, we cited two things. Number one, the failure to itemize travel by this consultant named Tim Mynett. The Federal Election Commission regulations are very specific about travel. If you have to report as individual disbursements any amount over $200 in the aggregate, you know, your hotel, your airfare, whatever.

But Omar on a report simply reported lump sum payments to an LLC owned by Mynett, which is a clear violation. Now that sounds technical, and it sounds a little nitpicking, but as an ethics group, we always look for technical violations in hopes of finding out the more serious improper activity that they are calculated to conceal.

CARLSON: Sure. The stuff hangs on technicalities. I mean, that’s what it is. It’s an accumulation of technical violations. So, Omar, in addition to being I would say, ideologically on the wrong side, seems very sleazy.

I mean, every time you press a little bit into her personal life, you can’t get a straight answer. There seems to be quite a bit of deception. That may not even be your real name. She may have married her brother. Then you have this? Has she shed any light on this at all? Has she responded to questions — your questions about it?

FLAHERTY: Well, I understand today that she denied everything. And that was curious to us because the violations about reporting the travel, they are straightforward, unambiguous violations and any election law expert would tell you that.

Now the more serious matter of whether she was having an affair with Tim Mynett, and used campaign funds to facilitate his traveling around the country with her. Well, we can’t state that we know that conclusively. But we’re saying that there’s enough circumstantial evidence for the FEC to launch an investigation, and we hope they do.

CARLSON: We’ll see. Peter Flaherty, thank you very much for joining us tonight.