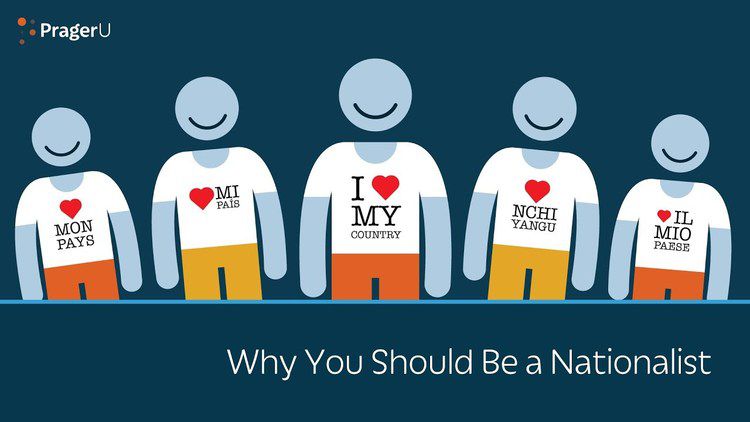 Sunday’s Los Angeles Times front-paged a story about Dennis Prager and his efforts using PragerU videos to educate young people and others about American history and principles, among various other topics. 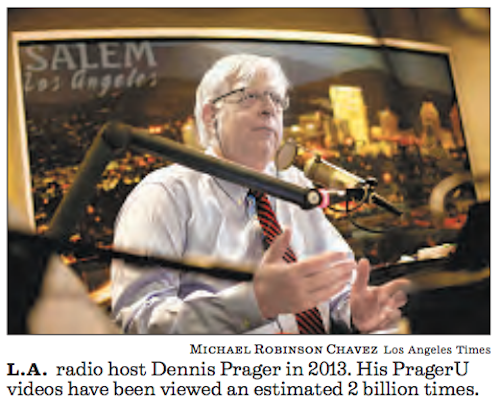 The Times used the word “indoctrinate” to describe PragerU more than once, although it’s obvious the paper regards its own publication as a fair representation of the news despite its decided liberal orientation and open-borders philosophy.

As an influential provider of conservative-leaning ideas, Dennis Prager has come under a lot of criticism from the left, particularly Silicon Valley.

On July 16, Prager appeared before a Senate hearing titled Google and Censorship through Search Engines to defend his work — see my report including video and transcript, Dennis Prager Responds to Google Censorship against PragerU.

To critics who call his videos biased, he remarked during his testimony:

Do you think the secretary-general of NATO, or the former prime-ministers of Norway, Canada, and Spain, or the late Charles Krauthammer, or Philip Hamburger, distinguished professor of law at Columbia Law School, would make a video for an extreme or hate-filled site? The idea is not only preposterous; it is a smear.

PragerU presents a variety of historical subjects, from the current failure of Europe to confront hostile Islam to the importance of the Protestant Reformation in creating modern freedoms. Most are essays presented by experts, from well known persons to professors you never heard of. All are interesting, and their Monday morning appearance is a good start for the week.

How a Los Angeles-based conservative became one of the internet’s biggest sensations, Los Angeles Times, August 23, 2019

WASHINGTON —  Earlier this summer, as Donald Trump assembled online activists at the White House to thank them for their role in getting him to the Oval Office and – Trump predicted – keeping him there, one guest didn’t rush to claim credit.

Los Angeles-based Prager University, a registered charity, is legally prohibited from politicking. It isn’t truly a university and doesn’t have a campus. But the digital empire created by Dennis Prager, a 71-year-old conservative radio host and erstwhile Never Trumper, is having more success rallying young people to Trump’s side than many campaign committees aligned with the president.

The concise videos PragerU launches onto the internet every week to indoctrinate and motivate conservatives have been watched more than 2 billion times, according to the group’s own count. Independent analysis done for The Times by Tubular Labs, a video measurement company, largely backs up that claim. PragerU consistently spends more on Facebook advertising than major political campaigns and national advocacy groups. It ranks among the top 10 biggest political spenders on the platform.

Its videos are becoming a staple on college campuses, where Prager is dead set on overturning liberal orthodoxy. PragerU boasts that thousands of college and high school teachers screen its videos in their classrooms.

All that has caused considerable consternation on the left.

“It is a sophisticated campaign to indoctrinate young people,” said Tara McGowan, chief executive of Acronym, a nonprofit that advises progressives on digital campaigning. “The amount of money they are putting behind it is alarming and significant. They seem to have created a savvy way to push an ideology onto an audience and get a tax break in the process.” (Continues)

The article goes into great detail about funding, including the identities of major contributors. If you are interested in Prager’s philosophy of education, the Times article provides almost nothing. For that, the best introduction is probably his Senate testimony: