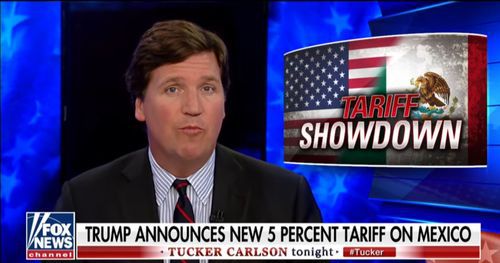 It’s been a fine few days for piercing criticisms of Mexico from Tucker Carlson. On Wednesday, after listing many Mexican acts of political and cultural sabotage against America, he summed up, “The point is, that’s what it looks like when a hostile foreign power interferes in your democracy. They don’t buy Facebook ads that nobody sees, why would they? They try to change the demographics of your country. That works.”

Friday’s segment on our unfriendly neighbor repeated the charge that Mexico is a “hostile foreign power” with more examples of the evil it has exported upon us with crime, drugs and illegal immigration.

Mexico’s continuing aid of illegal aliens from Central America pushed President Trump into declaring he would begin increasing tariffs against Mexican goods unless Mexico became more helpful — an act that got Presidente Obrador’s attention in the form of a pompous letter that referred to an iconic American statue as supporting his ideology of invasion for the world’s poor.

President Trump: You can’t solve social problems with taxes or coercive measures. How does one transform, overnight, the country of fellowship with immigrants from around the world into a ghetto, a closed-off space that stigmatizes, mistreats, chases, expels and cancels legal rights to those who are seeking — with effort and hard work — to live free of misery? The Statue of Liberty isn’t an empty symbol.

Apparently Senor AMLO mistakenly believes the Statue of Liberty is an immigrant welcome mat. In fact, the historical truth is revealed by the sculptor’s title: Liberty Enlightening the World: Bartholdi meant that others should be inspired by the successful American Revolution and throw off the chains in their own nations. 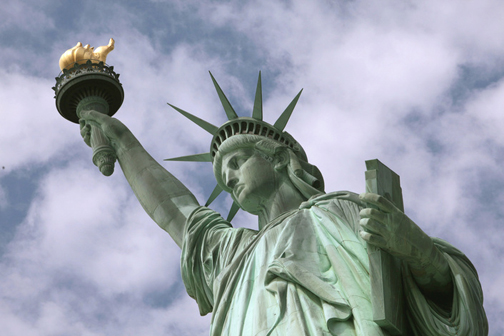 Tucker Carlson agrees that the Statue of Liberty was the wrong symbol for the presidente of the narco state to use.

TUCKER CARLSON: Good evening and welcome to “Tucker Carlson Tonight.” Just in case you’re wondering why the President was serious about the border crisis, last night, he delivered a decisive answer. In a surprise move the White House announced that unless Mexico halts the flow of illegal immigrants into the United States, the U.S. will — starting on June 10th — impose a five percent tariff on all imports from that country.

If the situation doesn’t improve going forward, that tariffs will rise by 5 percent a month, every month. By October, there will be 25 percent tariff on all goods coming from Mexico, from avocados to automobiles.

So let’s be honest about what that would mean. The U.S. imports $372 billion worth of goods from Mexico every year. The prices on all of those goods would likely go up. Consumers would feel that, so with businesses.

Critics claim that the tariffs would slow the U.S. economy and they’re likely right. Over time, they probably would, but we ought to impose them anyway. Not every government policy is a pure economic calculation.

For decades, the Mexican government has sent its poor north to our country. This has allowed that country’s criminal oligarchy to maintain power and get even richer, but at great expense to us.

The flood of illegal workers into the United States has damaged our communities, ruined our schools, burdened our healthcare system and fractured our national unity. It has suppressed wages for our most vulnerable. It has been a slow motion attack on this country, and its effects have been devastating.

There’s not a real debate about that. The numbers are clear, honest people admit it. But our leaders are not honest.

In the hours after the President’s announcement they instinctively sided with Mexico.

CNN ANCHOR JIM SCIUTTO: Well, tariff man is back. The President is threatening a new country with new tariffs. This time, Mexico.

CNN ANCHOR CHRIS CUOMO: It sounds “muy fuerte” — very strong, but who will it squeeze? Us or Mexico?

MSNBC GUY: Make no mistake about it, the U.S. consumers will bear the brunt of these tariffs.

CNN ANCHOR KATE BOLDUAN: Whether it’s a negotiating tactic or an attempt to distract, it’s still surprised everyone.

SAME MSNBC GUY: Nothing short of a political stuff.

FORMER OHIO GOVERNOR JOHN KASICH: So you know, I don’t know, maybe it was changing the subject from Mueller, I can’t figure it out.

CARLSON: John Kasich can’t figure it out. It’s too complicated for him. But the line of the week, the award for the most disingenuous response from a sitting world leader has to go to the left wing Mexican president, Andres Manuel Lopez Obrador.

In response to the tariff threat AMLO issued a statement that warned quote, “Social problems are not resolved with taxes or coercive measures,” end quote. In other words, says the liberal, “Government isn’t the solution.” Hilarious.

Lopez Obrador went on to lecture the U.S. President about America’s national values, because of course, the President of Mexico is just that arrogant and presumptuous to do that. Can you imagine? Quote, “The Statue of Liberty is not an empty symbol.”

Well, Mexico is corrupt. The ruling class believes it is America’s duty to absorb their country’s problems forever. The American left agrees. They are as contemptuous of America as the Mexican government is.