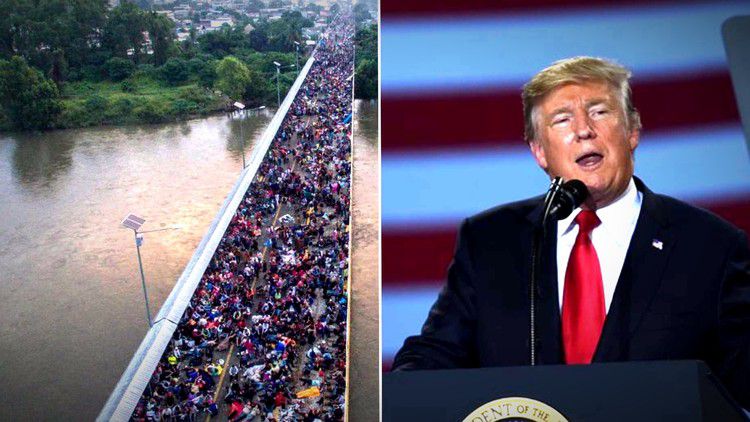 On July 26, the governments of the U.S. and Guatemala signed an agreement that is supposed to help our immigration situation.

OK, we have one with Mexico, now with Guatemala. Are we going to continue through Central and South America making deals with all the countries?

Well, if a deal is in our interest, that would be acceptable.

President Trump announced Friday [July 26] that Guatemala has agreed to sign a so-called "safe third country asylum agreement" as part of Trump's strategy for reducing the flow of migrants to the U.S. Trump made the announcement before reporters in the Oval Office as Guatemalan interior minister Enrique Degenhart signed the agreement. He called it "a very important" signing. "It's going to be terrific for them and terrific for the United States," Trump said, adding the agreement "will usher in a new era and investment and growth for Guatemala."

The bilateral agreement has been signed, although it's under attack back in Guatemala, which is now in the last two weeks of a presidential election.

...Guatemalan business leaders had pressured the government of President Jimmy Morales to make a deal with Trump. The U.S. is Guatemala's top trading partner and tariffs on Guatemalan goods coming into the U.S. could devastate the country.

Note that, as with Mexico, Trump applied pressure and got a deal. It's harder to do that though, with our own Congress.

Guatemalan President Jimmy Morales said via social media that the agreement allows the country to avoid “drastic sanctions ... many of them designed to strongly punish our economy, such as taxes on remittances that our brothers send daily, as well as the imposition of tariffs on our export goods and migratory restrictions.”

Note that Morales specifically referred to remittances to Guatemala, which contribute a not insignificant 12.1% of Guatemala's GDP. So the Guatemalan president was concerned about that.

That suggests that a tax on remittances could be effective. Mark that down for future reference.

However, Guatemala got something in return in this deal, and Trump openly spoke about it at the signing:

For Guatemala, it [the agreement] signifies the incredible bright future for their country. This agreement will usher in a new era of investment and growth for their nation, and sets the stage for cooperation between our countries and expanding access to the H-2A visa, which is your agricultural workers and farm workers.

We’re going to have them coming into our country in a easier fashion than even before. It’s very important for our business, for our farms, for our ranches. And we are going to make that a very, very much easier, less cumbersome program. And further bilateral investment will take place.

But the H-2A is really going to be streamlined. And all of those workers that come in, we want them to continue to come in. As you know, we have a very low rate of unemployment — record-setting. We’re at about 3.5, maybe 3.6. I hear it’s going down — probably will — because the country is doing tremendous business. Had another record stock market.