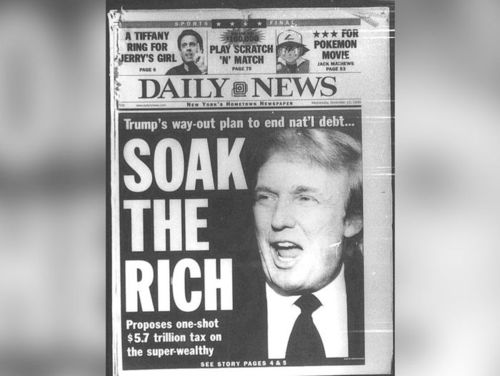 Donald Trump surprised a number of people when he recently unveiled his tax plan. He had seemingly promised a populist sounding platform that would soak hedge fund managers and the very rich. Instead, he presented a plan that resembles Jeb Bush's, only, well, bigger.  Naturally, the Beltway Right was overjoyed, including many of those who have been Trump's fiercest critics. So what's happening? Trump had a huge political opportunity here to define himself as an anti-Establishment Republican targeting the Donor Class. Instead, while holding the line on trade and immigration and maintaining a distinct position on foreign policy, Trump appears to be aligning with GOP orthodoxy on taxes except for eliminating some of the more egregious loopholes that help the very rich. For those hoping Trump was truly a different kind of Republican, this is disappointing.

However, from a political point of view, Trump is acting the same way as when he signed the RNC's "Loyalty Pledge," promising not to run as a third party candidate. During the first debate, many conservatives thought Trump had hurt himself by not committing to run as a Republican. Instead, he seems to have scared the GOP into demanding a loyalty pledge. He surprised everyone (and disappointed some) by proudly signing the pledge. But instead of pinning him down, it had the inadvertent effect of forcing other Republican candidates to remain loyal to Trump if Trump in fact wins the primaries.

Trump's tax plan has the same purpose. Albeit with some window dressing about taxing the "hedge fund guys" and a few policy changes, Trump is aligning himself with a "pro-growth" agenda that the Republican chattering classes can get behind. He's maintaining his trade and immigration policies to keep his credibility with the grassroots. He's not following the Main Stream Media's script and refuses to denounce his "far right" fans.  And on foreign policy, Trump has repeatedly bragged about opposing the Iraq War and taken a generally positive view of Russia's intervention in Syria, separating him from candidates like Carly "I won't talk to Putin" Fiorina.

There have been thousands of words written about the meaning of Trump and whether he could be the beginning of a new political movement or a new kind of politics. But perhaps we are learning something just as surprising. Donald Trump is, as he said, a Republican.

Trump has nationalist positions on trade and immigration, but besides that, he generally believes in the same things as most other Republicans when it comes to slashing taxes and boosting the economy. And his tax plan is his way of telling normal Republicans that they need to get behind him if they actually want to accomplish their goals when it comes to core economic principles.

Of course, Trump may learn the hard way that Conservatism Inc. isn't interested in winning, but would rather lose politely and operate as a "safety valve" for the Right. But he's forcing them to make a choice. Are DC Republicans willing to support Trump if it means they will get their tax cuts? And is the populist Right willing to stick with Trump and win on immigration even if it means making Grover Norquist happy on taxes?

What's clear is despite his attack dog posture, Trump is trying to build a broad coalition and unite the American Right, while picking off Reagan Democrats on trade and immigration. And whatever happens in the weeks ahead, Trump's campaign up to this point shows that he's a better politician than many would have thought possible.