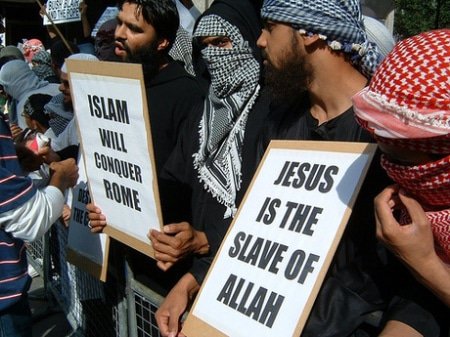 Robert Spencer: A Goal of ISIS Is to Conquer Rome in Five Years

CBN’s Dale Hurd interviewed JihadWatch’s Robert Spencer last month about jihad plans for the future of Europe and it inhabitants. Rome, and the Vatican in particular, should lock and load because the Pope’s church has a big target on its dome in the minds of Allah’s gangsters.

Noteworthy is Spencer’s remark about how the hordes of Muslim illegal aliens flooding into Europe (aka Hijrah) are an opportunity for the Islam tribe to accomplish its task, assigned by Mohammed, to conquer Rome.

SPENCER: Sheikh Yusuf al Qaradawi who is probably the most influential and popular Muslim sheikh in the world — he’s a TV preacher, actually he has a show on al Jazeera, and he has said that now is the time that the Muslims are going to conquer Rome. He states it as if it’s just an established fact that’s going to happen, and that he thinks it’s going to happen actually through a massive influx of immigrants and that is exactly what we’re seeing in Europe today. Then there are other preachers who are actively calling upon Muslims to conquer Rome, saying that the time is nigh now with so many immigrants in Europe and the European countries being so weak and supine.

When the Pope visited the United States recently, he was surprisingly quiet about the genocide of Christians in the Middle East and the threat to Christians and European civilization generally coming from jihadist Islam. Does he think that his gentle outreach will convince Allah’s psycho-killers to renounce their violence against non-Muslims? Francis appears to believe that liberal pacifism is the correct Christian posture against the monstrous evil that would destroy freedom in the world.

Presumably the Vatican’s security forces are more realistic than their boss, but the weakness of the world’s best known Christian leader is troubling.

ROME — The Islamic State has a plan to conquer Rome. Yes, it might sound crazy, but ISIS believes the conquest of Rome is central to its mission.

They believe it is necessary to fulfill what Islam teaches was the prophecy of Muhammed and to prepare the return of the Muslim messiah: the Mahdi.

“ISIS thinks that Rome is one of its primary goals and is in its timetable,” Robert Spencer, author of The Complete Infidel’s Guide to ISIS, said.

“It has a timetable where in the 10 years, by the year 2025, it hopes to bring about Armageddon, the final struggle between good and evil or between the Muslims and the non-Muslims,” he explained. “And that one of the chief stepping stones to that Armageddon battle is the conquest of Rome, which they think they’re going to be able to do with the next five years, by 2020.”

Rome remains to be conquered.

“Once Rome is conquered, in this view, within the next five years, then Israel will follow shortly after. They also believe that during this time period they’re also going to conquer Saudi Arabia and Iran,” Spencer said.

Now, before you laugh, consider that phase one of the Islamic State’s plan to take Rome may already be underway: flooding Europe with ISIS fighters under the cover of the current refugee crisis.

“And that’s something we see happening right now in Europe. And so it’s not that far outside of the realm of possibility that they could at least make these attempts,” he continued.

The Islamic State reveals part of its plan in its publication “Black Flags From Rome.” It will use sleeper cells and expects to get help from Muslims serving in European armies and from non-Muslim sympathizers.

It also wants to fire missiles into Italy that it has captured on the battlefield.

Islamic Armageddon This is a threat that is hard for Italian and foreign policy expert Emaneule Ottolenghi to be concerned about. He said Europe has more pressing problems because of ISIS.

“The concern should be commensurate to the reality of the threat,” he said. “The Islamic threat does not pose that kind of threat today. My main concern is with the lone wolf terrorist who plots a terror outrage against a school, against a supermarket, against a shopping mall, against an airport.”

The conquest of Rome has been a primary goal since the beginning of the Islamic State.

“They think that the conquest of Rome will be the complete sign of Islam’s superiority over Christianity and defeat of Christianity,” Spencer said.

They also see the fall of Rome on an eschatological timeline that will culminate in a battle against the infidel armies near Dabiq, Syria; their version of Armageddon, according to Spencer.

“And they think that once this battle takes place at Dabiq, this final battle which they see coming 10 years from now 2025, then the Muslims will battle the non-Muslims in this town in northern Syria,” Spencer said.

“And then Jesus, the Muslim prophet, and Mahdi will return to the Earth, and they will together conquer and Islamize the world,” he said.

Celebration by Killing If their plan for Rome succeeds, ISIS says it will throw homosexuals from the top of the leaning tower of Pisa.

But the main event, as they see it, will be the beheading of the Pope in St. Peter’s Square, broadcast and live-streamed to a horrified international audience.

Spencer said a member of ISIS recently said “‘Once we take Rome we are going to carry out mass beheadings in St. Peter’s Square.'”

“And so this is the plan, to convert St Peter’s Square into a huge site of executions to people judged to be enemies of Allah, chief among them the Pope, in order to cow and frighten the rest of the world into submitting to their rule,” Spencer said.

It’s a plan that, for now, has little chance of success.

But in his new book, The ISIS Apocalypse, author and expert William McCants says ISIS has recently taken a longer term view of the conquest of Rome and the return of the Mahdi, and is willing to wait in order to build up its forces.

ISIS is now next door to Italy in North Africa. More importantly, Islamic State fighters are reportedly already inside Italy, some posing as refugees, going about their lives, waiting for the day when the battle for Rome begins.