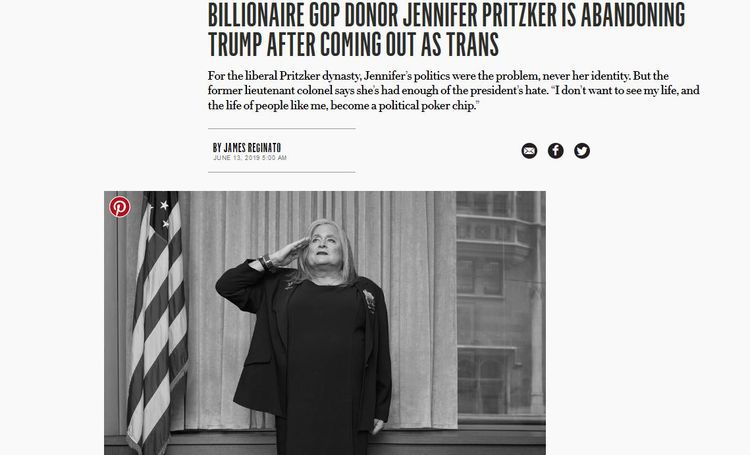 For the liberal Pritzker dynasty, Jennifer’s politics were the problem, never her identity. But the former lieutenant colonel says she’s had enough of the president’s hate. “I don’t want to see my life, and the life of people like me, become a political poker chip.”

… Several Pritzkers are currently well known. Jay Robert (known as “JB”) became governor of Illinois in January, and his sister, Penny, served as commerce secretary in the Obama White House. But the family has always closely guarded its privacy.

But around the end of 2013, an alteration was made on the tree, one which few people saw coming: “Jennifer Natalya Pritzker born as James Nicholas Pritzker.” …

Pritzker has also been highly active in politics. In the view of some, the startling thing about her is her choice of party. The Pritzker clan has long been decidedly socially liberal and Democratic—the governor and the former commerce secretary are Jennifer’s first cousins—and Chicago itself is deep blue. But the colonel is blood red. A top Republican donor, she has written big checks to the likes of John McCain, Jeb Bush, Mitt Romney, and Donald Trump, for whom she voted.

“For the Pritzkers her transitioning wasn’t that eventful. They’re all cool with it. It’s like, pass the salt,” says a family friend. “Her Republicanism—that’s more difficult for them.”

I keep pointing out that the most famous transgenders are virtually daring to the public to notice that their main Talking Point — I always felt like I had a female brain — is hooey because they tend to have hilariously male-brained careers. Here’s a guy who was born into historic wealth, and yet he spent a huge number of weekends doing Army Reserve stuff. Why? Because his brain loves the Army.

Slang terms for the rank historically used by the U.S. military include “light colonel”, “short colonel”, “light bird”, “half colonel”, “bottlecap colonel” (referring to the silver oak leaf insignia), and “telephone colonel” (from self-reference as “colonel” when using a telephone).[citation needed]