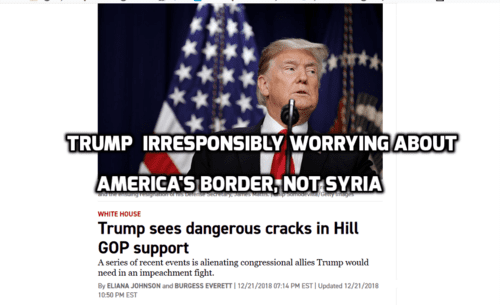 Trump Is Irresponsibly Worrying About American Border Rather Than Syria

Some Republicans find the juxtaposition between what they consider a reckless foreign policy and a reckless border wall fight to be infuriating. “Syria is crumbling. And we’re talking about a f****** wall,” this senator said.

What insanity is next from Trump? Perhaps that madman in the White House might even withdraw American troops from Niger — NIGER! — and station them on the American border. As George Washington explained in his Farewell Address:

Why forego the advantages of so peculiar a situation? Why quit our own to stand upon foreign ground? Why, by interweaving our destiny with that of any part of Europe, entangle our peace and prosperity in the toils of European ambition, rivalship, interest, humor or caprice? But, of course, Europe is one thing, while Niger is another. American grenadiers must always be stationed in Niger. The forever war in Niger who we are.