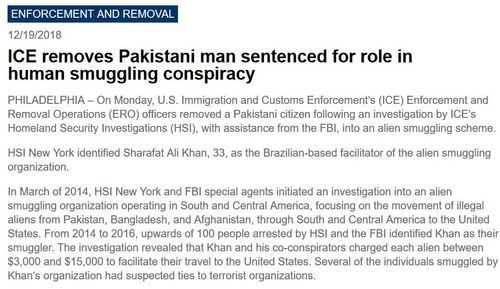 In March of 2014, HSI New York and FBI special agents initiated an investigation into an alien smuggling organization operating in South and Central America, focusing on the movement of illegal aliens from Pakistan, Bangladesh, and Afghanistan, through South and Central America to the United States. From 2014 to 2016, upwards of 100 people arrested by HSI and the FBI identified Khan as their smuggler. The investigation revealed that Khan and his co-conspirators charged each alien between $3,000 and $15,000 to facilitate their travel to the United States. Several of the individuals smuggled by Khan’s organization had suspected ties to terrorist organizations.

On June 1, 2016, the Brazilian Federal Police executed a search warrant at Khan’s residence in Brazil.

On June 2, 2016, Khan fled Brazil and attempted to travel to Pakistan via a commercial flight transiting through Doha, Qatar.

On June 3, 2016, the U.S. District Court for the District of Columbia (DCDC) issued an arrest warrant for Khan, charging him with conspiracy to encourage or induce an alien to enter the United States for financial gain. On the same date, authorities at Hamad International Airport in Doha detained Khan pursuant to the arrest warrant.

On Oct. 17, 2017, DCDC convicted Khan of conspiracy to defraud the United States, and encourage or induce an alien for commercial advantage or private financial gain. DCDC sentenced Khan to 31 months’ incarceration with credit for time served since June 3, 2016.

On Dec. 29, 2017, ERO Philadelphia officers encountered Khan at the Moshannon Valley Correctional Center (MVCC) in Philipsburg and lodged an immigration detainer with the facility.

On Aug. 31, 2018, MVCC remanded him to ERO Philadelphia custody, who transferred him to the Clinton County Correctional Facility (CCCF) in McElhattan.

On Dec. 19, 2018, Khan was turned over to Pakistani authorities without incident.