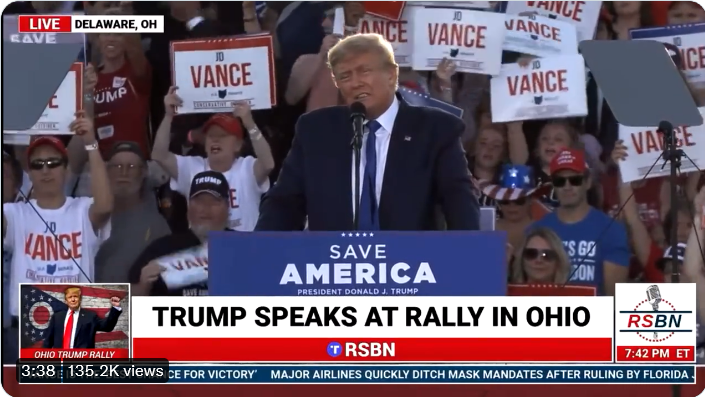 Speaking at a Save America rally last night in Delaware, Ohio, POTUS 45 Trump reendorsed GOP candidate J.D. Vance and accused Treason Lobby Democrats of siding with drug cartels and human smugglers in their obsession with open borders. But once again, he ignored legal immigration and Biden’s crazed plan to import at least 125,000 refugees, if not double that amount. In other words, he ignored the obvious: The Great Replacement.

“@JDVance1 is tough. He’s smart. He’s a former Marine. He’s a Yale educated lawyer. A fearless MAGA fighter. He fights like crazy and he loves Ohio and quite frankly a great Buckeye.” - President Trump#TrumpRally 🇺🇸 pic.twitter.com/xSgsGmS2ZJ

“Now either you’re stupid or you hate our country” if you support Let’s Go Brandon’s open-borders immigration policies. “It can only be one of 2.”

I pick the latter for an obvious reason. Joe Biden and his Homeland Security chief—unindicted Cuban-Jewish visa fraudster Alejandro Mayorkas—have openly, and repeatedly, said they will not enforce U.S. immigration laws.

“There’s no way that anybody can want open borders,” Trump continued:

The radical democrats have chosen their side, and they’ve sided with the drug cartels. … The money is so big. … There has to be something going on because nobody could want to open borders, where hundreds of countries are pouring in. … Who can want that? … [Democrats have] sided with these drug cartels and human traffickers … and child smugglers, and criminal aliens and savage thugs of MS-13.

Noting that he ended catch-and-release and built 500 miles of border wall, Trump said Biden has “blown the border to shreds,” and will soon stop Title 42 expulsions, the only thing keeping out what Biden’s own officials predict could be an invasion of 18,000 illegals per day.

That’s all well and good. But Trump ignored legal immigration, foreign workers, and walked by some really low-hanging fruit: TPS for 12,000 Cameroonians who should be shipped back to Africa.

The Hillbilly Elegy author spoke twice…briefly. Should he land in the Senate in January, one of his top priorities is restarting the border wall, a near impossibility even if Republicans take Congress and pass appropriations for it. For doing so means the GOP must override Brandon’s certain veto.

Yet opposing the illegal-alien invasion at the border is hardly going out on a limb. He didn’t mention it last night, but Vance goes farther, much farther, than Trump did. He attacks legal immigration, and he attacks it in detail at his campaign website.

“In no other developed country do we allow migration primarily based on family relations rather than skills,” Vance begins:

Millions of people want to come here, and we should only allow them if they contribute something meaningful to our country. Importantly, our ability to assimilate immigrants successfully—something our country should be proud of—is contingent on American leadership that loves this country. Forty years ago, new American immigrants came to a country where bipartisan leaders delivered a simple message: this great country is now your own, and you have a duty to help build it. Today, those same leaders deliver a different message: this is an evil and racist country, and you owe nothing to it. Because of this, our capacity to assimilate the next generation of immigrants is limited, and our legal immigration system should account for this fact by changing who we let in and reducing the total numbers.

I'm incredibly honored to have President Trump's support. He was an incredible fighter for hard working Americans in the White House, he will be again, and I'll fight for the America First Agenda in the Senate. https://t.co/s3d3JhTgBC

Trump was solid—on the 2020 election and the Democrats’ openly anti-American and destructive, crackpot policies such as Defund the Police, and not least open borders. But Trump could and should have said what Vance does.