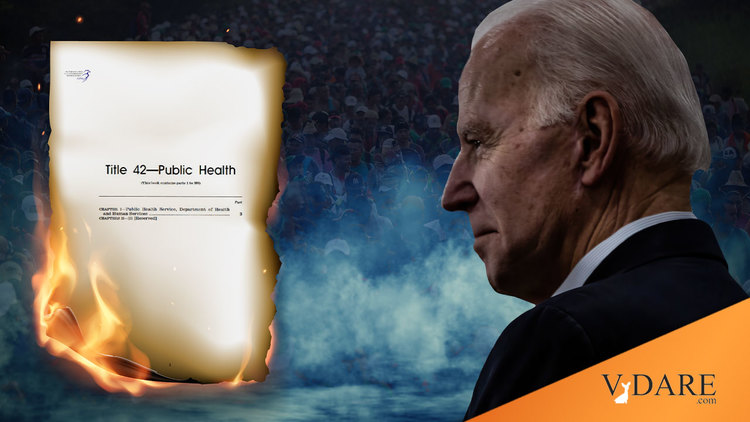 AP: Biden Will End Title 42 On May 23; Prepare For Major Invasion Of Illegals

The Biden Regime will finish opening the border to the Third World’s penniless vagabonds on May 23 when it ditches POTUS 45 Trump’s implementation of Title 42, the law that permits U.S. immigration authorities to remove illegals on health grounds.

The latest on Title 42, which Trump used to keep illegals with the FluManchu out of the country, comes from the Associated Press. Sources told the news service that Traitor Joe has caved to the communist Treason Lobby, and will reverse Trump’s entirely sensible order in less than 60 days.

“The decision, not yet final, would halt use of public health powers to absolve the United States of obligations under American law and international treaty to provide haven to people fleeing persecution, and would apply to all asylum-seekers,” AP reported [AP sources: Asylum limits at border expected to end May 23, by Colleen Long, Jason Dearen, and Elliot Spagatt, March 30, 2022]:

Ending the limitations in May would allow for time to prepare at the border, the people said. But the delay runs against the wishes of top Democrats and others who say COVID-19 has long been used as an excuse for the U.S. to get out of asylum obligations.

It also raises the possibility that more asylum-seeking migrants will come to the border at a time when flows are already high. The Department of Homeland Security said Tuesday that about 7,100 migrants were coming daily, compared with an average of about 5,900 a day in February and on pace to match or exceed highs from last year, 2019 and other peak periods.

AP’s report sounds credible. Officials from the Centers for Disease Control were scheduled to finish their evaluation of lifting Title 42 on March 30—yesterday. The same day, AP reports that Biden will move on May 23.

Timing aside, let’s not forget what regime spokesmen say will happen if Let’s Go Brandon reverses the policy.

In a phone call with reporters, officials said they foresee daily apprehensions of illegals reaching 18,000 per day.