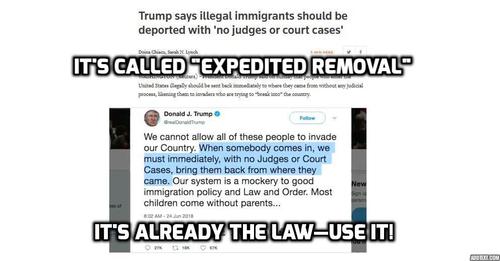 #DeepState Saboteurs are thwarting immigration enforcement in the Kirstjen Nielsen-run Department of Homeland Security (DHS).  At every opportunity Nielsen half-asses immigration enforcement, refuses to take action available to her, and refuses to give President Donald John Trump the options he needs to make his immigration policy effective and successful.  Case in point is the current surge of illegal aliens from Central American flooding the border, both crossing illegally and appearing at Ports-of-Entry (POE) to falsely claim asylum.  Your humble correspondent has given sage advice to the President, warning him that Nielsen is sabotaging his policy by failure to take action and failing to advise him of the legal options he has.

In my most important post since the suppression of my blog by Google, I advised President Trump, Peace Be Upon His Name, that he had options in the invasion by the Caravan of Death To America By Demographic Displacement.  [Fate Of Honduran Caravanners STILL Unclear, But Trump MUST Crack Down With Executive Options, by Federale, VDARE.com, May 17, 2018]  The most important part of that advice was that he had the legal authority to prohibit physical and legal entry of asylum applicants at POEs and had authority to removal all the caravaners by Expedited Removal (ER). However, Lady DACA, our dear little blonde bimbo Kirstjen Nielsen, has refused to present these two options to the President and advise him he had all the authority he needed to end the crisis at the border by vigorous executive action, with a pen and a phone, to quote former President Barack Hussein Obama.

President Trump is nothing but an instinctual leader in many aspects.  This is not to say he is totally un-analytical.  To this day I recall him discussing his development of a former Old Post Office in Washington, DC with the cuck Hugh Hewitt.  President Trump was at the top of his game, conversant with details of policy and results.  He clearly showed his intelligence and command of the issues, unlike other times where he appears to wing it.

However, many times when President Trump wings it, he is speaking from the heart, such as when he identified the primary issue of the day, the invasion of the United States by Mexican rapists and other illegal aliens.  While he might not have been as detailed and correct as with the Old Post Office, he understood the fundamentals.

Whether rapists or not, all illegal aliens are invaders, and should be removed tout de suite. Or, as your correspondent has repeatedly advocated, by Expedited Removal (ER).  ER is the legal process by which illegal aliens who enter the United States can be removed without referral to the Executive Office for Immigration Review (EOIR), the immigration court system; a system that takes years to deal with even the most simple case of illegal aliens without any recourse to deportation.

To date, Lady DACA (Kirstjen Nielsen) has refused to implement Expedited Removal despite orders from President Trump on his first day in office to do so.  But the instinctual President Trump knows something is wrong and he hit the nail on the head today; he demanded the immediate deportation of the caravaners without recourse to the courts.  Clearly someone, probably Stephen Miller, has gotten word to the President that he has options.

President Donald Trump said on Sunday that people who enter the United States illegally should be sent back immediately to where they came from without any judicial process, likening them to invaders who are trying to “break into” the country…

In a series of tweets on Sunday, Trump said: “We cannot allow all of these people to invade our Country. When somebody comes in, we must immediately, with no Judges or Court Cases, bring them back from where they came.”

“Cannot accept all of the people trying to break into our Country. Strong Borders, No Crime!”

It was unclear if Trump was advocating an expansion of the provision that allows expedited removals of illegal immigrants at or near the U.S. border, a policy his administration has embraced since he took office. Nor did Trump differentiate between illegal immigrants and people who entered the United States to seek asylum protection.

[Trump Says Illegal Immigrants Should Be Deported With ‘No Judges Or Court Cases,’ by Doina Chiacu and Sarah N. Lynch, Reuters, June 24, 2018]

So, it appears that President Trump knows something is going on with Lady DACA and the current crisis that Nielsen refuses to take action on.  Lady DACA has not told the President that he has the authority to prohibit the entry of asylum applicants and the authority to remove then under Expedited Removal.  Why, because Lady DACA is part of the problem, not part of the solution.  She is a saboteur, part of #TheResistence.

As an aside, representatives of the Treason Bar and the ethnic grievance lobby immediately claimed President Trump cannot do what the law allows.

His proposal drew immediate criticism from legal analysts and immigrant rights advocates who said it would violate the U.S. Constitution’s due process provision, which applies to citizens and non-citizens alike…

“The president of the United States has just forcefully proposed the end of political asylum and no due process for migrants,” Sherrilyn Ifill, president of the NAACP Legal Defense Fund, wrote on Twitter.

Lee Gelernt, the deputy director of the ACLU’s Immigrants’ Rights Project, told Reuters: “The administration cannot simply get rid of all process for immigrants. The due process clause absolutely applies. It’s not a choice.”

Interestingly, Reuters pointed out an important point, though the reporters lied about the origin of the current policy on ER.

Authorities can bypass due process protections with the expedited removals policy that allows quick deportations if an immigrant is apprehended within 100 miles (160 km) of the border and has been in the country less than 14 days. Those seeking asylum must be granted a hearing.

The above limits on ER (distance from the border, i. e.100 miles, or amount of time in the country, i.e 14, days) are not part of the law.  They are part of the illegal limits placed on ER by the Bill Clinton, George Bush, and Barack Hussein Obama Regimes. There is no distance limit for ER, and the time limit to implementation is two years from entry by the illegal alien in question. These limits could be removed by the same "pen and phone" Obama used.

Sadly though, Lady DACA continues to defy President Trump on Expedited Removal, maintaining the Clinton, Bush, Obama limitations on its use by DHS components.

Time for President Trump to remove Lady DACA and bring in full implementation of Expedited Removal and blocking of asylum applications on the southern border by Central Americans.  He has the authority, does he have the will and the support in the bureaucracy?