Rioters Prove Mexicans "Not Criminals" By Committing Criminal Acts; Prove Their Loyalty To The U.S. By Brandishing The Mexican Flag—Brilliant Strategy!

The violent mayhem being loosed against Trump at various rallies resembles that of a Third World country. It should also remind us that the framers of the U.S. Constitution were against “mobocracy”.

A significant proportion of these rioters are Mexicans or Mexican-Americans, though it is clear they self-identify as the former not the latter.

They are angry at Trump for calling Mexicans criminals. So to prove Trump is wrong they commit criminal acts.

No guys, they're just true #nevertrump conservatives dedicated to principles and the Constitution. pic.twitter.com/1McYF7gm52

Do they claim to be Americans? If so, why brandish the Mexican flag and yell “¡Viva México!”?

It’s brilliant for the Trump Campaign because it shows in bold relief what is at stake here.

Why is there such a frenzied opposition to a candidate who wants to enforce the law?

It’s not just about one candidate. It really doesn’t matter what anybody thinks about Trump the man. Trump is a target because of what he stands for and for his courage.

I suggest readers browse the photographs of the violent protests outside a Trump rally in Albuquerque, New Mexico. Just look at these photographs. (Click here). These are not “demonstrators”,  they are violent people. Do we want our country turned over to people who act like this?

Just read the title of the article:

'Thugs' chant 'Viva Mexico' while burning Stars and Stripes flag as Trump's may 24th rally in Albuquerque rally erupts in violence: Billionaire hits out at 'criminals' who clashed with riot police in the streets  by David Martosko, Daily Mail, May 25, 2016.

Once again, thanks to Britain’s Daily Mail for showing us Yanks what’s going on in our own country. 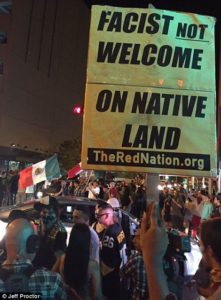 Where is the outrage? Where is the condemnation from Bernie Sanders or Hillary Clinton, or for that matter from Ted Cruz or Jeb Bush?

Trump needs to continue to emphasize that. Demonstrators who brandish the Mexican flag and shout “¡Viva México!” to condemn an American candidate are behaving as de facto agents of a foreign nation.

It’s not we who are imputing their loyalty to a foreign power. It’s they themselves who do so, by their own behavior.