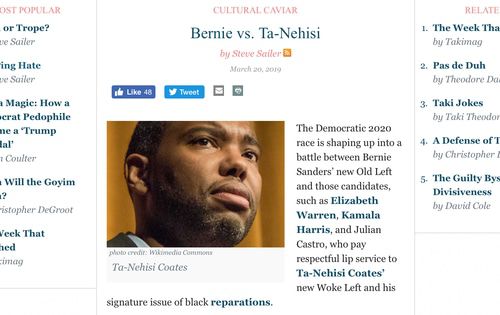 Sailer in Taki's: Bernie vs. Ta-Nehisi

Bernie vs. Ta-Nehisi
by Steve Sailer

The Democratic 2020 race is shaping up into a battle between Bernie Sanders’ new Old Left and those candidates, such as Elizabeth Warren, Kamala Harris, and Julian Castro, who pay respectful lip service to Ta-Nehisi Coates’ new Woke Left and his signature issue of black reparations.

Senator Warren, with her usual sound judgment, tweeted on Tuesday that it’s “time to start a national, full-blown conversation about reparations,” an old question made fashionable once again by Coates with his 2014 Atlantic article just before the Ferguson debacle.

Coates, a college dropout and semi-employed journalist, improbably rose to being the decade’s most celebrated left-wing intellectual by embodying the comic-bookish spirit of the age. As progressives become more demographically diverse, the ideas that appeal to them become more regressive. Coates, who went from receiving the MacArthur genius grant for his denunciations of escalator racism to writing the Black Panther comic book for Marvel, epitomizes the essential childishness of the woke.

In contrast, Bernie, the 77-year-old socialist, wishes everybody would just shut up about Coates’ divisive issue of reparations and get back to talking about nonracial kitchen-table issues such as Bernie’s Medicare for All.