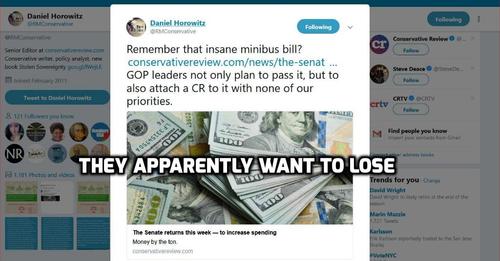 The Republican leadership in Congress has never forgiven Donald Trump for winning the 2016 election. Unfortunately, incredibly, the painfully naïve Trump has put the weight of his office behind a legislative agenda indistinguishable from what Jeb Bush or Marco Rubio would have done—tax cuts and a failed effort to repeal Obamacare.

The GOP is now staring down the barrel of a potentially catastrophic midterm election cycle. Its only hope is to energize the GOP base by acting on the issues that fueled President Trump’s election, especially immigration. Instead, the “limited government” conservatives have decided to fully fund Democratic priorities while doing nothing to fund President Trump’s border wall.

The House planned to vote Thursday afternoon on a $147 billion package to fund the Energy Department, veterans' programs and the legislative branch. The Senate passed that measure by a 92-5 vote Wednesday night.

Legislative leaders also announced an agreement on a bill to fund the rest of the government through Dec. 7. Rep. Rodney Frelinghuysen, R-N.J., chairman of the House Appropriations Committee, said this short-term plan would be added to a separate spending bill that lawmakers are negotiating to cover the Defense Department and labor, health and education programs.

The stopgap bill would not address President Donald Trump's long-promised wall along the U.S.-Mexico border. GOP leaders have said they prefer to resolve the issue after the Nov. 6 elections.

Of course, what “GOP leaders” think is going to be irrelevant after November, and the Democrats are much more likely to push for impeachment than to somehow fund President Trump’s signature initiative. Incredibly, while congressional Republicans won’t fund border security, they will fund Democratic priorities.

Politically of course, this is idiotic. Yet congressional Republicans seem determined to suppress their turnout of their own base even as Democrats report sky-high enthusiasm.

Think about it: Rather than pairing the wall, ICE, and immigration riders with funding for the military, for one large messaging bill on safety and security – and then pounding the many vulnerable Senate Democrats with ads – they are pairing the Department of Education, Obamacare, welfare programs, and Title X with the military! Those are the true priorities of GOP senators.

Once again, as with Paul Ryan’s infamous omnibus spending bill in 2015 that helped fuel the Trump rebellion against the GOP Establishment, Democrats are claiming victory. And President Trump seems to be willing to just take it.

Trump has given mixed signals about the fiscal year 2019 government budget, which so far doesn’t include any money to pay for the construction of a wall along the Mexican border, which was a top Trump campaign promise.

Trump told Fox News last week “If it was up to me, I’d shut down government over border security." But he added, “I don't want to do anything to hurt us or potentially hurt us” in the November midterm election, where Republicans are fighting to keep control of the House.

Democrats declared victory over the spending process, noting the bill does not include spending reductions called for in the Trump administration’s 2019 budget proposal.

The great question that confronts observers of the Republicans in Washington D.C. is whether they are simply stupid or sociopathic.  Illegal immigration is currently surging, and the Democrats are poised for absolutely crushing victory in the midterm elections. Out of self-preservation, one might expect this would spur the GOP into action. Unfortunately, the GOP seems content to go down to defeat. One wonders if this is what they wanted all along—for President Trump to be removed and the situation to return to “normal” as Republicans become a feckless opposition that vaguely whisper about spending and debt once in a while.

President Trump still has the power to stop this. He’s surrounded by enemies that he has appointed, enemies that even brag about their sabotage of his Administration in The New York Times. He needs to ignore his advisors and fight for the platform he was elected on. Rather than getting in pointless fights on Twitter, he needs to discipline his own party [Trump stirs up needless controversy over Hurricane Maria death toll, by Philip Wegmann, Washington Times, September 13, 2018]. If he doesn’t, he has no one else to blame for what is coming.