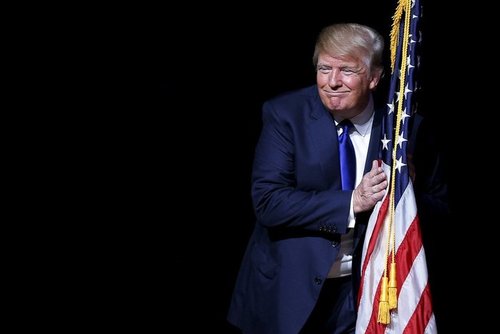 Movement conservatives are lining up behind Ted Cruz, who has now opened up a sizable lead in Iowa. But Trump still leads nationally and has even larger leads in other early voting states including South Carolina and New Hampshire [Poll: Trump holds sizable leads in NH and SC; Cruz ahead in Iowa by Kyle Balluck, The Hill, December 20, 2015].

However, one of the most important movement conservatives in American history said something which sounds an awful lot like an endorsement. Speaking on the omnibus spending bill passed by Paul Ryan and the Republican Congress, Schlafly called it a "betrayal of the grassroots and of the Republican Party."

“We thought we were electing a different crowd to stand up for America, and they didn’t. We’re extremely outraged by what Congress has done. Nancy Pelosi couldn’t have engineered it any better. I think the people are going to react by electing Donald Trump...

“It sounds like Donald Trump is the only one who has any fight in him. He will fight for the issues that we really care about and are very hot at the present time, such as the immigration issue. I don’t see anyone else who’s eager to fight.”

But Schlafly's best comments come when she said:

“He does look like he’s the last hope [for America],” Schlafly said. “We don’t hear anybody saying what he’s saying. In fact, most of the people who ought to be lining up with him are attacking him. They’re probably jealous of the amount of press coverage he gets. But the reason he gets so much press coverage is the grassroots are fed up with people who are running things, and they do want a change. They do want people to stand up for America. It really resonates when he says he wants to ‘Make America Great Again.’”

There are three major points here.

If Trump is able to win over even a few conservative leaders to his side, he wins. Cruz needs to rally the existing movement to back him for one last charge. If even a few hesitate, he has no path to the nomination.

Did Schlafly just endorse Trump? No and she might come around to Cruz eventually. We can only imagine the pressure being put on people in the Beltway Right to consolidate around the Texas Senator. But the grassroots has a mind of its own. And if Trump can come in a strong second in Iowa and go on to win other states, we'll see the phalanx start to break.