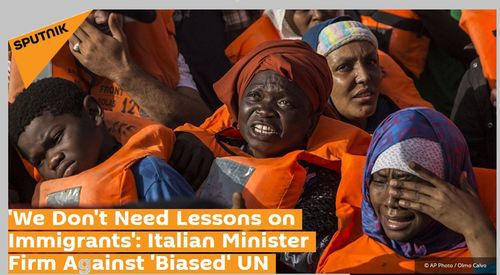 The United Nations, which for some reason the United States continues to fund, has launched new campaign against Western nations [U.S. Funding for the United Nations: More Than Anybody Realizes?, Council on Foreign Relations, September 28, 2017]. Michelle Bachelet is the new UN High Commissioner for Human Rights, and the former Chilean president is doing her best to undermine the patriotic government of Italy and force that beleaguered country to accept yet more Third World migrants.

The UN's human rights watchdog is launching an investigation into the immigration policies of the populist governments in Italy and Austria, citing concerns over reports of a "sharp increase in acts of violence and racism" against migrants and visible minorities.

Michelle Bachelet, the newly installed UN high commissioner for human rights, announced the measure in her first speech this morning in Geneva. She called for a more rational and generous global approach to those fleeing conflict, persecution and poverty.

"Historically, people have always moved in search of hope and opportunities. Erecting walls, deliberately projecting fear and anger on migrant communities … such policies offer no long-term solutions to anyone – only more hostility, misery, suffering and chaos," said Bachelet, former president of Chile, who took over the agency Sept. 1.

This of course is the opposite of the truth. Once these "migrant communities" are accepted into Europe, they are a permanent source of tension, criminality, corruption, and national security threats. Nor will those countries that accept these migrants receive any credit; the migrants and their descendants will forever accuse their host countries of "racism" and journalists will forever declare they must "do more." The only way to win the game is not to play.

Luckily, Italy's Interior Minister, Matteo Salvini, loves his country, is using the power of his office to defend its interests, and is gaining more support seemingly every day. And he's firing back at the globalist attempt to destroy Italy.

Italian officials have issued a snappy comeback, when faced with an accusation from what they called a "pointlessly costly and badly informed" international organization.

In response to her remarks, Mr. Salvini pointed out that Italians don't need "lessons" from the UN and advised the organization should "look for racism elsewhere."

"If I were the UN, I would have half a world to send inspectors to before Italy. Go look for racism elsewhere, not in Italy. Before doing checks on Italy, the UN should investigate its member States who ignore basic rights like freedom and equality between men and women," he said.

The Italian minister also said his country's financial contributions to the international organization should be reconsidered.

"The UN is an organization that costs billions of euros, to which Italy gives over 100 million every year in contributions and we will weigh with our allies on the usefulness of continuing to give these 100 million euros to fund waste, embezzlement, and theft for a body that wants to give lessons to Italians and that also has countries that engage in torture and [still have] the death penalty," Salvini said.

Incidentally, in Bachelet's native Chile, national officials are taking steps against the wave of Failure Migration coming from Haiti.

Haitians emigrating to South America from their native country have traditionally chosen Chile as an adoptive home, based in part on its relative economic security. However, after President Sebastián Piñera revoked on-arrival tourist visas in April, the numbers have been dropping and those unable to stay in Chile have turned their gaze to neighbouring country Argentina.

Right-wing Piñera’s decision in April had immediate results, and since May, more Haitians are leaving Chile than entering the country, Economia y Negocios explained.

Saul Alinsky famously said that one's concern with the ethics of means and ends varies inversely with one's personal interest in the issue. Similarly, one's support of Third World immigration varies inversely with one's personal responsibility for the consequences. The UN and its parasitic officials, of course, have no responsibility. But perhaps if Western nations start withholding funds from the organization, the globalists might get the message.