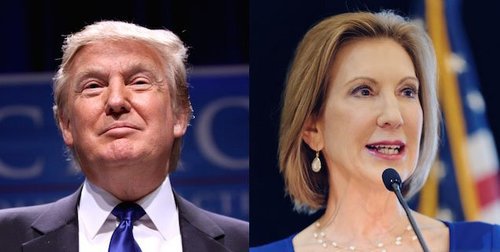 There are clear signs that the MSM is preparing to mount a cheerleading campaign for Carly Fiorina in a frantic effort to derail Donald Trump. The equally desperate GOP Establishment is highly likely to sign on, especially given the persistent anti-historic American male bias of Conservatism Inc when it comes to choosing candidates.

Fiorina is their best hope (perhaps even better than Jeb Bush) for increased levels of legal immigration, a pathway to citizenship for illegal aliens and a massive increases in imported foreign workers.

Fiorina has also weighed and been found wanting by the redoubtable Daniel Horowitz. His Conservative Review posting Does Carly Have the Record to Throw These Punches? August 12th 2015 is to my mind so definitive as to make creating an alternative version a waste of scarce resources.

Horowitz evaluates Fiorina on several public policy fronts, demonstrating that she has been consistently on the wrong side of all of them. Having analyzed her GOP Establishment shilling over the Debt Ceiling and Obamacare/Budget Funding issues he turns to immigration with devastating consequences:

In 2010, while running for Senate in California against Democratic Senator Barbara Boxer, Carly affirmed her support for the DREAM Act amnesty, noting “I would support the DREAM Act because I do not believe that we can punish children who through no fault of their own are here trying to live the American dream." The DREAM Act has served as the foundation for Obama’s cycle of amnesty and Fiorina’s defense is the heart and soul of the arguments Hillary can and will use during the general election…

Carly also opposed fixing the birthright citizenship loophole for illegal aliens and referred to it as an “emotional distraction.” She also accused some opponents of amnesty as taking on a racist tone. Again, that is exactly what Hillary says...

In February 2013, when the Gang of 8 released the worst comprehensive amnesty bill of our time, Carly was one of its biggest cheerleaders on the Sunday shows. Appearing on Meet the Press, she said "I applaud and salute the Gang of Eight's proposal. Let's move forward and vote on that." She appeared on This Week on February 3 praising the bill as a “carefully crafted” balance and a “good first step,” while expressing hope that the Democrats would not oppose it. This bill was the embodiment of what is wrong with the very political class she now inveighs against in her well-honed stump speech.

Hillary can eat her alive.

I see we at VDARE.com have not discussed Fiorina directly since she lost the 2010 California Senate race by 10 percentage points in a great Republican year. Our California correspondent Brenda Walker then was disgusted by Fiorina observing in California Carly Ramps Up Hispandering

Many in Silicon Valley and beyond remember Fiorina’s 2004 remark: “There is no job that is America’s God-given right anymore.” …Are candidates incapable of Hispandering without insulting traditional Americans (i.e., “immigrants were the heart of this great country”)? Poking citizens in the eye is no way to win friends and gain votes when Americans are still the great majority of voters even in Mexifornia.

Nominating a Cheap Labor Lobby Waitress like Fiorina (whose business career was a classic of Affirmative Action over-promotion) will be a sure path to another low white turnout disaster.