The Woke Don't Do Mountain-Climbing, Apparently 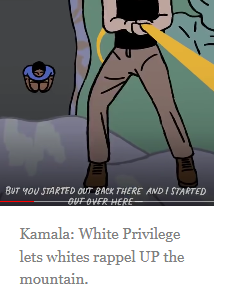 Much of Diversity-Inclusion-Equity ideology originates in Schools of Education for use in teacher training seminars, so the quality of the artwork created to illustrate the sacred concepts of Wokeness is often at the Comic Sans level of Photoshop sophistication.

Also, many of the artists and much of the audience are comically clueless about the metaphors they try to exploit, such as mountain climbing.

In my new Taki’s column, for instance, I pointed out that Kamala Harris’s video about the difference between Equality (boo!) and Equity (yeah!) consists of an elaborate mountain climbing analogy in which the climbers are somehow pulled up the mountain by their safety ropes.

It’s almost as if the Vice President doesn’t grasp that rappelling is for descending mountains, not for ascending them.

Now, a couple of iSteve commenters have pointed me toward another Woke mountain climbing cartoon, this one in Cell, a formerly prestigious scientific journal:

You see, mountain climbers use ladders to ascend the mountain, but the ladder is a Jim Crow whites-only ladder. Then, on the first ledge, the all-white reviewers shove Climbers of Color off the ledge to their career deaths. But, ironically, that is why white climbers never get all the way to the top of the mountain: too much groupthink and no strong Climbers of Color to give whites boosts to the top. After all, who has ever heard of white people by themselves climbing any mountains or making any scientific discoveries? Just Google American Scientists and you’ll be schooled.

What we need instead is a second ladder, segregated just for Climbers of Color. Then on the first ledge, Antiracist reviewers will hang around and give boosts up the mountainside.

You might be aware that ladders (except for crossing glacier crevasses on the way to the mountain), boosts, and hand-ups don’t actually play a large role in mountaineering, but people who know what they are talking about are not the ideal audience for Woke Artwork.

Other examples on similar themes: From the U. of Michigan’s Rackham Graduate School: mountain-climbing in 4″ heels: It’s a good thing the Woke don’t go mountain climbing much, because, judging from their assumptions about how to do it, they’d soon plummet: These people who don’t understand the physics of mountain climbing are putting the DIE in Diveristy-Inclusion-Equity.