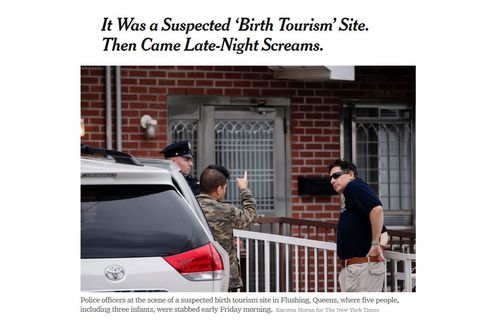 It Was a Suspected ‘Birth Tourism’ Site. Then Came Late-Night Screams.

Many neighbors had long been suspicious about the red brick townhouse in Queens.

Bryan Kim, 19, said he had seen pregnant women showing up at the home.

Sheng Long Peng, 70, said he had often seen the owner of the home arrive in his car with groups of pregnant women.

“They would arrive as much as twice a week,” she said.

By the time Kayla Cho, another neighbor, woke up shortly after 3:30 a.m. on Friday to the sound of high-pitched screaming coming from the home, followed by cries for help, the questions about the mysterious residence had taken a violent turn.

When officers arrived at the house in the Flushing neighborhood, they found three infants and two adults had been stabbed by an employee who then cut her own wrist, according to the police.

Law enforcement officials said the employee was Yu Fen Wang, 52, who was unconscious when officers arrived at the scene. She regained consciousness after officers applied a tourniquet to stop the bleeding, and was taken into custody. She is undergoing a psychiatric evaluation.

At the home where the stabbings occurred, officials said they found cribs for 11 children and believe that nine babies were present at the time of the attack. Two knives were recovered at the scene, the police said.

Officials do not know if the mothers will take them back home in what appeared to be a “maternity tourism” or “birth tourism” operation. Once U.S. citizen children turn 21 they can sponsor a parent for a green card.

Back in 2011, I had Google translate a Chinese birth tourism ad so I could list the seven advantages the Chinese see in scamming their kids in on American birthright citizenship.