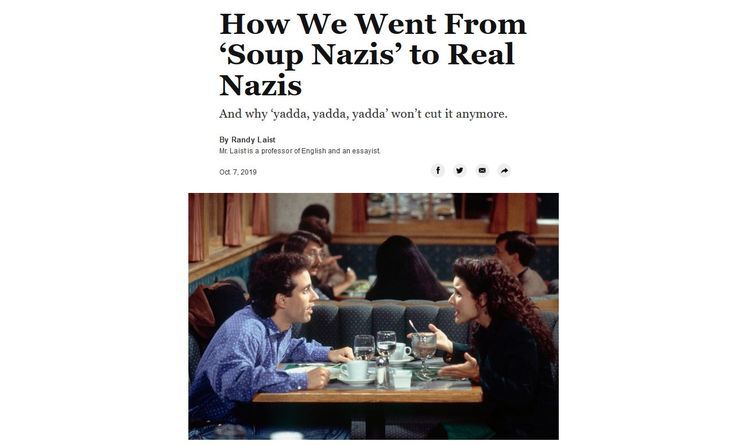 The Revolt Of The Unfunny Comes For SEINFELD

One of the striking aspects of this decade is how much resentment has built up among the humorless against the humorful. It’s of course analogous to Current Year people feeling oppressed by, say, the great medical innovators of the recent past who saved millions of lives, demanding that their portraits be taken down from medical schools walls.

How We Went From ‘Soup Nazis’ to Real Nazis
And why ‘yadda, yadda, yadda’ won’t cut it anymore.

By Randy Laist
Mr. Laist [Email him] is a professor of English and an essayist.

But where is he based?

If you watch “The Handmaid’s Tale” on basic-subscription Hulu, the fraught dystopian narrative is periodically interrupted with advertisements, one of which promotes “Seinfeld” episodes available on the company’s streaming service….

I watched the 1980s movie version of The Handmaid’s Tale with Robert Duvall but don’t remember much about it other than it was over after only a couple of hours, fortunately. The current TV series is equally bad, but it just drags on forever…

… The characters in “Seinfeld” occupy a sheltered, privileged outpost at the end of history. … The end of the 20th century was coinciding with a new era of American consumerist hegemony, where the only Nazis were “soup Nazis,” where the only problems left to agonize over were “first-world problems,” and where any committed political or ideological point of view was correspondingly irrelevant, tone-deaf or simply uncool. …

Films like “Pulp Fiction” and “The Truman Show” exemplified the ironic sensibility, as did other television shows like “The Simpsons,” publications like The Onion and even the popularity of post-structural semantic theory on college campuses. …

Flash-forward several eventful decades, to Gilead. We now sing bitter songs of experience. Post-9/11, post-Charlottesville and post-El Paso, comic irony is not only tone-deaf and uncool, but also complicit with the kind of evil that flourishes outside the solipsistic bubble of Jerry’s apartment. Our millennial co-workers are correct to fault Generation X with fetishizing a worldview that is politically impotent, that represents a dead-end philosophically and aesthetically, and that is steeped in white, male, upper-class privilege. …

When Fred and Serena Waterford are arrested for war crimes at the end of the third season of “The Handmaid’s Tale,” no one is laughing …