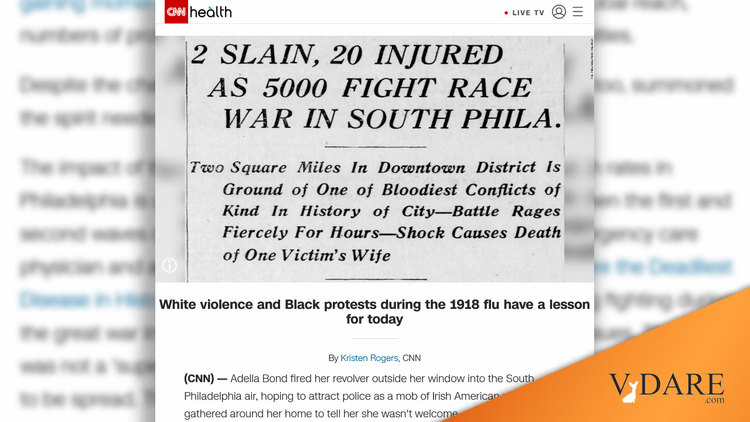 Earlier (2015): Progressives' Increasing Infatuation With Antiquarianism: "The [1910] Roots Of Racial Segregation In Baltimore"

White violence and Black protests during the 1918 flu have a lesson for today
By Kristen Rogers, CNN

… Violence instigated by White people, violent police encounters and protests for racial justice were rampant in Philadelphia during the 1918 flu pandemic. . George Floyd, a Black man from Minneapolis, was killed by a White policeman in May 2020. That killing and others by police led to the Black Lives Matter movement gaining momentum over the summer, in terms of national and global reach, numbers of protests and new supporters beyond Black communities.

… “We may not be able to establish casualty [sic] scientifically or historically between the outbreak of disease and the virus of racism, but we understand all too well that when we fear for our very lives, our mortality can shred our civility,” Brown said in an unpublished paper on the topic. “This dread exposes a primal panic that unleashes the violent human impulse to blame and hurt others in ways inexcusable. There are many lessons we’ve learned from looking at the history of pandemics, but some, regrettably, we never seem to take to heart.”

… “What you have in the early 1900s and today is rising nativism, White ethnocentrism and White supremacy,” Hardy said. “After World War I is when you witness the rebirth of the Ku Klux Klan which, in the 1920s, becomes a major political force. … The culture wars that we’re witnessing today are very much reminiscent of the culture wars in the 1920s. It’s basically fear of a White minority.”

“There are chilling parallels between what we have seen in the midst of the coronavirus pandemic with the revelation of quite brutal police killings of African Americans and what actually happened back in 1918,” Brown said.

“That story is a very sobering one — not least for which it reminds us that this kind of violence against the African American community is nothing new, sadly,” he said. “We know how long it’s been around, but when it comes to pandemics, it’s been around for well over a century.”