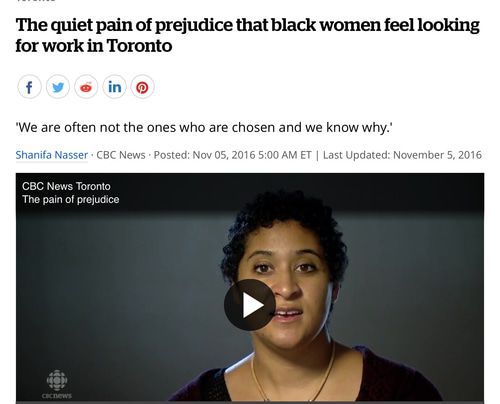 Sheena Blake can still remember the feeling in the pit of her stomach when she was offered the job.

At first she thought she had beat out the other candidates, but she soon learned that she was on top of the list for a different, much more insidious reason.

“Someone asked me to work for them so they could meet their quota of having a multicultural space,” Blake told CBC News.

That was years ago. But it’s just one example of the countless quiet, hidden abuses that she says happen daily to black women, especially when it comes to the workplace.

​Studies in the U.S. and Canada reveal that job applicants with ethnic-sounding names are less likely to get a response than those with Anglo-Saxon names, despite having the same experience and credentials. …

And, of course, the H-Word comes up for the umpty-umpth time:

“In real life what ends up happening is that when we go in for an interview, there’s a pressure to straighten our hair, to wear makeup that allows our faces to contour in a way that looks more European,” Blake told CBC News. “Even after all of that, we are often not the ones who are chosen and we know why.” …

“When people think about Canada they think about freedom, tolerance. It’s not true … Folks say, ‘I don’t see colour,'” she said. “But I need for you to see my colour.”

That’s not because she wants workplaces to hire based on race. Instead, she wants her colour to prompt a conversation about their biases.

The first question she wants answered: “What is it about my colour that’s so bothersome to you?”

How much affirmative action is there in Canada?