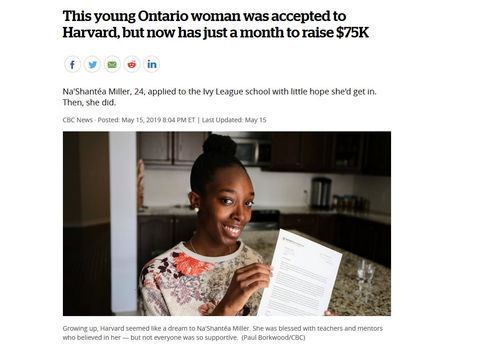 The original idea behind affirmative action was to give a helping hand to American blacks for a while to make up for the past. But over time it mutated into Diversity, which is forever and benefits blacks of all backgrounds, not just American blacks.

This young Ontario woman was accepted to Harvard, but now has just a month to raise $75K

Na’Shantéa Miller, 24, applied to the Ivy League school with little hope she’d get in. Then, she did.

Imagine getting into Harvard University and then finding out you’ve got just three months to come up with tens of thousands of dollars to prove you’ll be able to afford the tuition.

Growing up, Harvard seemed like a dream to Miller. She was blessed with teachers and mentors who believed in her — but not everyone was so supportive.

“For sure, people have told me in the past, ‘You’re not going to get far with a name like Na’Shantéa with an apostrophe, an accent aigu and a capital ‘S,'” Miller told CBC News.

When it came time to do the standardized GRE test, required for most graduate schools in the U.S., Miller says she didn’t do very well. But the only thing worse than rejection, she told herself, was not knowing.

But getting accepted is one thing and the reality of going to her dream school, she learned, is quite another.

Miller was accepted to the Harvard Kennedy School’s Master’s in Public Policy, a two-year program she says costs more than $115,000 per year. And for the school to provide her a student visa, she needed to come with one year’s worth by June 15.

Can a Canadian leverage a Harvard $230k M.A. in public policy into a job high-paying enough to make this profitable? How high paying are government jobs in Canada? Not at all bad, I assume, but are they a gold mine, especially if you are not that bright? How much affirmative action does Canada have these days?

Another question is how far up the ladder does affirmative action extend? For example, Michelle Obama was long sore that, even though affirmative action helped her get into Whitney Young H.S., Princeton, Harvard Law School, and Sidley Austin corporate law, it petered out abruptly at Partnership level, so she washed out of the law in a few years, but still had to pay back her HLS student loans.