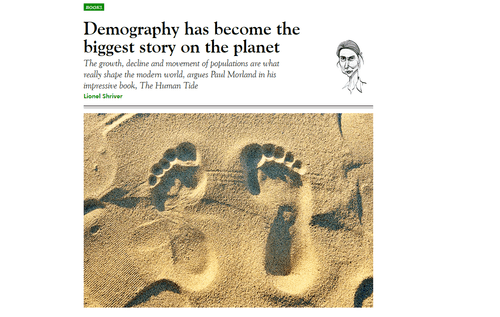 Lionel Shriver On "The Human Tide"

Novelist Lionel Shriver (not to be confused with anthropologist Lionel Tiger, the writing partner of Robin Fox) writes in The Spectator:

Demography has become the biggest story on the planet

The growth, decline and movement of populations are what really shape the modern world, argues Paul Morland in his impressive book, The Human Tide
Lionel Shriver

One of my vanities is that all my novels are different. Yet one astute journalist identified a universal thread: ‘Too many people,’ she said. …

Since the 1960s, writing about demography has steadily shifted from regarding high fertility rates as tragically entrenching poverty to accepting that numbers confer power. Not mincing words, Morland declares boldly at the outset that ‘ethnicity matters politically’. He spells out that ‘nations and ethnic groups are real’ and ‘they matter in history’.

… If Great Britain, as the historian Timothy Snyder claims, ‘made the world’, it did so, Morland explains, ‘by exporting people’. Ergo, people to spare made the British Empire possible.

The Human Tide shies from this risky inference, but it’s worth asking: if Europe’s sending its extra population abroad projected power, exerted influence and claimed territory, isn’t mass migration from developing nations to the West not currently doing the same thing? After all, democratic countries confer real political power on their inhabitants (although Brexit seems to be testing that proposition). One plausible explanation for the rise of identity politics and the ever-increasing role that race plays in issues of the day is simply mass immigration. Numbers translate directly into voice and clout. …

I have only one serious criticism of this excellent book, and that’s a matter of proportion. Thus far, Africa has failed to get with the programme. Although its fertility rates have come down, they haven’t plummeted nearly as quickly as they were supposed to. Consequently, UN estimates for the global population at which we’re meant to level off, once heading steadily downwards, now go up every year. By 2050, Africans may total 2.5 billion, and 4.5 billion by 2100. Given demographic momentum, to a degree these numbers are baked in. But perhaps because stubbornly large African families jar with the transition model, Morland devotes a scant eight pages to this crucial continent, and dubiously Pollyanna pages at that.

The author isn’t always so demure. He forcefully discounts a popular mantra of British multiculturalists: ‘It may often be said that England has always been a land of immigration, but this is simply untrue.’ Until very recently, England and Wales have absorbed a tiny, demographically incidental handful of Huguenots and Jews. The rise of the population that does not consider itself white British from 2 per cent in the 1960s to nearly 20 per cent in 2011 is ‘historically unprecedented’.