Name a Christmas movie where the desired gift for Santa to bring a young, white American male is a gun.

A diverse remake of A Christmas Story bombed... why didn't audiences warm to a movie depicting a black Santa Claus and a multiracial America???

You know, the movie set in 1940 lionizing a fictional northern Indiana town, following the desires of a young white child hoping Santa gives him a Red Ryder BB-gun?

That A Christmas Story, which once a year plays for 24 straight hours on TBS.

Made in 1983, A Christmas Story has become not just a cult classic, but a unifying culture force for otherwise disconnected white Americans. A reminder of just how morally bankrupt our nation is, many white Americans identify with the female leg lamp (the major award the father wins in A Christmas Story) far more than they do with actual Christian symbols forming the basis of Yule season.

But there's one problem with the continued celebration of A Christmas Story: it's an embarrassingly white movie that not only celebrates gun ownership, but pokes fun at Chinese immigrants who can't properly pronounce fa-la-la-la-la-la-la-lah when they sing the chorus of Jingle Bells (didn't you know Jingle Bells is a racist song?).

So what to do about this embarrassingly white Christmas movie, glorifying an America that once existed without diversity and cultural enrichment? 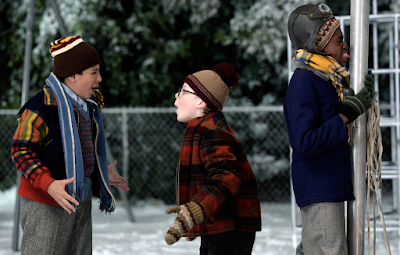 How about doing A Christmas Story Live on Fox, complete with a mulatto mom played by Maya Rudolph, a black Santa Claus, a black Flick (you know, in the original version the white kid who gets triple-dog dared into sticking his tongue on a flag pole), a Hanukah song, and Chinese immigrants who speak perfect English and perfectly sing Jingle Bells without any racial stereotypes?

How A Christmas Story Live! Made Its Chinese-Restaurant Scene Less Racist, Vulture.com, December 17, 2017

When families and “You’ll shoot your eye out!” obsessives gather ‘round the old flat-screen to watch Fox’s ambitious musical event, A Christmas Story Live!, they may notice a few adjustments to the beloved 1983 film that inspired the special.

Unlike the original film — which starred Peter Billingsley as a boy desperately pining for a Red Ryder carbine-action two-hundred-shot Range Model air rifle in 1940s Indiana — it’s a musical based on the 2009 production by Dear Evan Hansen’s Benj Pasek and Justin Paul, who wrote a slew of new songs for the Fox event. (The production also enlisted Matthew Broderick to play grown-up Ralphie as the show’s onscreen narrator.) 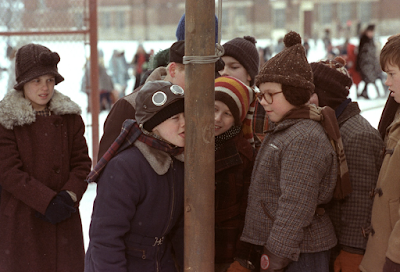 Fans of the movie will notice that the production deviates from an almost entirely white cast to include a more diverse group of performers, including Maya Rudolph as Ralphie’s mother, David Alan Grier as the surly department-store Santa Claus, Fred Armisen as a store elf, Ken Jeong as a Christmas-tree salesman and Chinese-restaurant owner, and scores of other actors of color who appear as townspeople, Ralphie’s classmates, and in a myriad song-and-dance numbers.

But the most noticeable update comes toward the end of the production, during the Chinese-restaurant scene when a group of Asian waiters sing “Deck the Halls” for Ralphie and his family on Christmas day. The original film depicted the waiters as performing the song with stereotypical mispronunciation, singing the song’s refrain as “Fa ra ra ra ra” instead of “Fa la la la la.” But in this version, the quintet — in real life, the a cappella group Filharmonic — performs the classic carol flawlessly.

David Alan Grier said he felt that the production overall addresses the diversity issue in a more “natural” way as compared to other recent similar efforts.

“Remember NBC’s live Sound of Music? Audra McDonald was a black nun living in Austria? What was going on there?” Grier laughed. “That was the real story for me.”

In fact, it has lower audience score on RottenTomatoes.com than the universally derided A Christmas Story 2, a direct-to-dvd movie made in 2012.Moral of the story?

Diverse remakes of beloved Christmas stories don't go over well in a country where large segments of the population now realize the America nostalgically depicted in A Christmas Story is far, far superior to the country we find ourselves strangers in today.

It should also be remembered the director of the original A Christmas Story, Bob Clark, was killed by an illegal alien in 2007.