THE INTERCEPT Smears Jon Feere For (A) Hatefacts About MS-13; (B) Retweeting HateFacts From VDARE.com

In The Intercept, Lee Fang [Email him] writes

In President Donald Trump’s push to restrict immigration to the United States, MS-13 has become the perfect villain. Trump has focused obsessively on the violent street gang tied to immigrants from El Salvador, appearing at events across the country to highlight brutal murders committed by the group, focusing on two teenagers who gang members allegedly hacked to death with machetes.

There’s a political angle to the singular focus on MS-13. The Trump administration has made its strident demands to wipe out the gang in explicit conjunction with sweeping calls to unravel so-called sanctuary city protections, to promote laws to ramp up deportation proceedings and expand the detention of immigrants, to broaden immigrant gang-tracking databases and special gang task forces, to deputize local law enforcement for immigration enforcement, and in recent days, even to justify the repeal of the Deferred Action for Childhood Arrivals program.

In short, Trump is harnessing the horrors of MS-13 in an attempt to enact much of his immigration agenda.

Putting it another way, the existence of MS-13—and the Mexican Mafia, the Russian Mafia, Jamaican drug gangs and Hmong street gangs, etc.—are the reason there is a Trump immigration agenda, which is the reason Americans voted for him.

But Fang has an agenda of his own—to smear Trump advisor Jon Feere—an immigration expert who’s been working for CIS for years, and is now working for Trump.

And that’s a good thing—Fang reports what sounds to him like “hate” but sounds to me like good news.

Jon Feere was in January appointed as a special adviser to Immigration and Customs Enforcement, following a decade of work at the Center for Immigration Studies, an anti-immigration think tank. Feere outlined the strategy to use MS-13 as the perfect villain to ramp up a national crackdown on immigrants in a 2008 position paper he co-authored at CIS. The paper was Taking Back the Streets: ICE and Local Law Enforcement Target Immigrant Gangs, By Jessica Vaughan and Jon Feere, CIS, September 30, 2008. The graph at right shows who was arrested by Operation Community Shield.

While Trump’s promises to weed out the “bad hombres” predate Feere’s hiring, the administration’s actions on immigration almost uncannily mirror the paper’s proposals. Feere focused on the dangers posed by MS-13 and, much like Trump and his allies are doing today, suggested that enhanced immigration enforcement — from removing sanctuary protections to granting local police immigration enforcement powers — was necessary to gang suppression.

Feere and his CIS colleague Jessica Vaughan set forth similar arguments in a video posted to CIS’s YouTube channel. The duo stressed the MS-13 threat and explained that a response could incorporate broad anti-immigrant policies, from preventing people without proper immigration documents[I.E. illegals] from getting jobs, accessing social services, and obtaining identification documents to stop [illegal] immigrants from “blend[ing] into the community.” Apparently Fang thinks it's "hateful" for Feere to support victim families—see the illustration at right, and further, he's smeared us and Feere—although there's no more association between us and him than  between us and any other patriotic American.

Last year, Feere tweeted an article by VDare, an anti-immigrant eugenics site run by Peter Brimelow, a writer who argues that migration policies should favor white people. The article highlighted an incident in which a man was killed by an [illegal, of course] immigrant. “It’s time to make immigration policy great again,” Feere tweeted in his last message before joining ICE.

The @BostonGlobe mocks deportation in a state where a young man was hit and dragged to death by an illegal alien: https://t.co/S4gAM4xtlU

And here's the article Feere was tweeting: Matthew Denice: Murdered By Deval Patrick And Massachusetts' Liberal Establishment, in which Brenda Walker said:

The crime itself outraged the town of Milford and received national attention for its brutality. Matthew Denice, a recent IT graduate of Framingham State University, was struck while riding his motorcycle by Nicolas Guaman, a drunk and unlicensed illegal alien driver from Ecuador who should have been deported for various previous arrests, including assaulting a cop.

Denice was not killed instantly. He was caught under the truck. But Guaman continued to drive for a quarter mile, despite bystanders pounding on the vehicle and screaming for him to stop. Guaman finally did stop—when his pickup ran off the road, after which he backed up over Denice who had become dislodged, and then sped off.

Remember that Fang described this as "The article highlighted an incident in which a man was killed by an immigrant."

Anyhow, let me go on record as denying that VDARE.com is an "anti-immigrant eugenics site"—"Eugenics" was an early 20th century ideology of state control of breeding people, either to "improve the breed" or prevent the birth of genetically damaged children. In 2005, Steve Sailer wrote here

“[E]arly supporters of eugenics tended to be…secular centrists and leftists who enthusiastically endorsed Darwinism without actually knowing much about it. Eugenics’ opponents were primarily religious, led by the brilliant Catholic controversialist G.K. Chesterton, author of Eugenics and Other Evils.

“Chesterton pointed out that the ‘positive eugenics’ of society arranging marriages among the most fit was self-defeating. If arranged marriages actually succeeded in breeding better men and women, the first thing these healthier, smarter, more robust individuals would do would be to tell society to butt out of arranging their marriages, and they’d go back to choosing their own mates!” 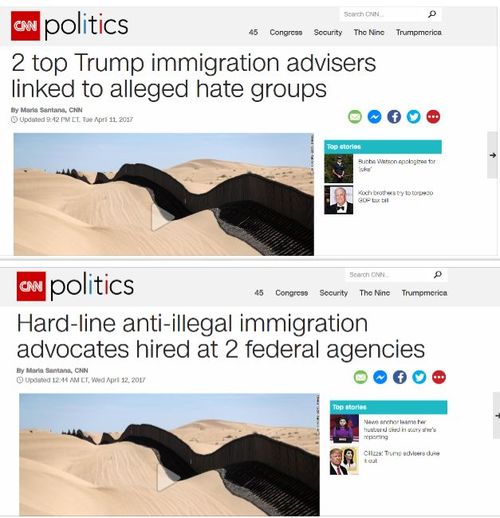 What most people who claim we're talking about eugenics mean is that we believe in heredity, like every scientist in the world—I wrote an article myself called “Eugenics” Is What Happens When Cousins Don't Marry, pointing this out.

An earlier guilt-by-association attack on Feere, produced a climb-down from CNN—see

That CNN attack included this: "Feere also was quoted frequently in the publications of VDARE.com, a white nationalist website."

The idea that an immigration expert could acquire “guilt by association” with us by being quoted here (about 20 times–nothing to the number of times we’ve quoted David Frum) is deeply weird. But it's a symptom of the attempt to find imaginary connections with Google.