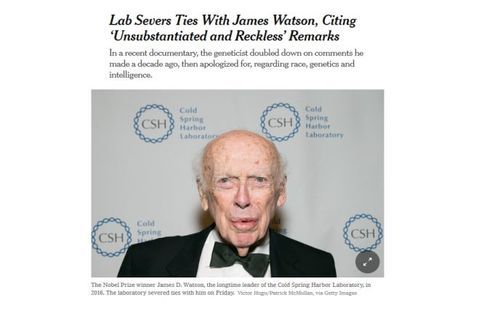 James Watson Watsoned Again for Saying: "And Yet It Moves"

Lab Severs Ties With James Watson, Citing ‘Unsubstantiated and Reckless’ Remarks
In a recent documentary, the geneticist doubled down on comments he made a decade ago, then apologized for, regarding race, genetics and intelligence.

Dr. Watson, one of the most influential scientists of the 20th century, had apologized after making similar comments to a British newspaper in 2007. At the time, he was forced to retire from his job as chancellor at Cold Spring Harbor on Long Island, but he has retained his office there, as well as the titles of chancellor emeritus, Oliver R. Grace professor emeritus and honorary trustee. The graduate school of biological sciences at the research center is named for Dr. Watson, and the laboratory held a 90th birthday party for him last spring.

But leading geneticists say that even modern DNA studies are currently unable to validate such hypotheses about differences between human populations.

Amy Harmon is a national correspondent, covering the intersection of science and society. She has won two Pulitzer Prizes, for her series “The DNA Age”, and as part of a team for the series “How Race Is Lived in America.”

Dear Amy: Do you feel no shame?