Hispanic Texas Town May Be America’s Most Corrupt

Sunday’s Washington Post had a feature about a small Texas town where nearly all the elected officials have been arrested for corruption. Crystal City, population 7190 (2010 Census), is located 35 miles from the Mexico border. 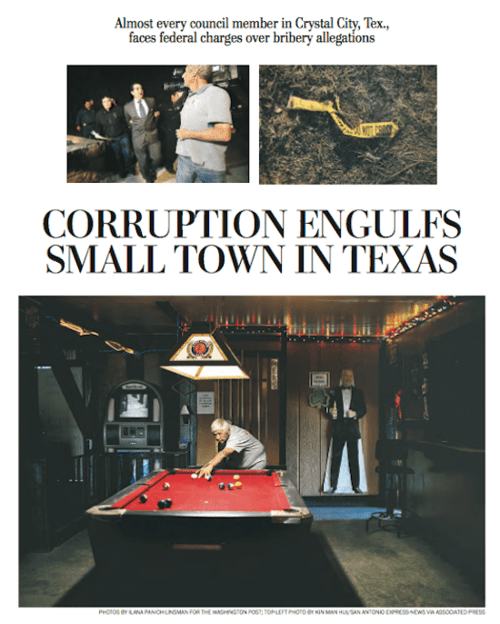 Another important statistic: the town is 97 percent Hispanic. The Mexican influence is strong there, given the cultural backgrounds of many, plus the proximity to the border with its well financed drug cartels who pay to have favors performed.

Polling shows that Mexicans dislike the level of everyday corruption at home, but when they relocate to the United States they bring it enthusiastically as part of their treasured heritage. When foreign workers have to pay kickbacks to get a construction job in Houston, they say it is “just like in Mexico.”

Bribery — mordida in Spanish — is a cultural norm is Latin America. A 2013 poll asked residents of various countries whether they had been asked to pay a bribe within the past 12 months. In Mexico, the number was 31 percent.

Unfortunately, more than 11 million Mexicans resided in the US as of 2013, and Mexicans account for nearly half of the illegal aliens here.

We Americans are unlucky in geography, a fact that shows up in southwestern border towns.

This Texas town might be the most corrupt little town in America, WP Bloomberg, March 5, 2016

CRYSTAL CITY — Packs of dogs roam the streets in this small town about 120 miles outside of San Antonio, and dozens of vacant homes and businesses have their windows barred or boarded. The city council, which is supposed to run the government, has only one member not facing federal criminal charges, and the city manager, also charged, has been suspended. In recent weeks, the water from some residents’ faucets gushed out black.

“It’s, like, this poor town,” said Tomasa Salas, 55, as she waited in front of city hall to pick up plastic jugs of water. “There is good here, too. You just got to dig really deep to find it.”

The confluence of poverty and suspected political corruption have made Crystal City a national emblem of a small town gone bad, a place where nepotism festered for so long that the FBI had to bring in nearly 100 agents to clean it up.

“If this is a wake-up call for all other towns and cities and other municipal areas, thank God,” said Councilman Joel Barajas, the only council member not to face a federal charge.

The FBI has long waged a war against corruption in small towns across the country, but the problem seems to have grown particularly acute in the southern and western parts of Texas. In recent years, the feds have charged county officials involved in bid-rigging and kickback schemes, law enforcement officers who sold drugs they seized to other traffickers and even a state judge who took bribes for favorable rulings. The FBI’s San Antonio Division launched 23 public corruption investigations in 2012, 51 in 2013 and 64 in 2014, authorities said.

In Crystal City, federal prosecutors alleged in early February that the majority of the council members were engaged in a conspiracy to help one another take bribes from those wanting to do business with the government, and one had an illicit side project: transporting illegal immigrants.

Rob Saale, an assistant special agent in charge at the FBI’s San Antonio Division, said authorities in southern Texas are battling a “perfect storm” of factors that contribute to government malfeasance. The small cities are close to the border – where Mexican drug traffickers will pay officials to facilitate their trade – and the residents are generally poor. The median household income in Crystal City, according to the most recent census data, is $24,503. When money flows in from traffickers, state grants or other sources, Saale said, elected leaders, who are unpaid for their duties, are tempted to take a cut.

Residents in Crystal City had already filed a petition and court challenge to remove several council members when the FBI showed up, but replacing them has not been easy. The council needs three members present to form a quorum and call a recall election. So far, the panel has not been able to achieve it – although a judge on Thursday ordered three of them to show up and schedule the election for May, according to a lawyer in the case.

Those who manage the town’s day-to-day affairs – the police chief, the city finance director, city clerk and wastewater superintendent – say they are trying to pay the bills, enforce the laws and generally keep up city services while figuring out what comes next. The people who live here say they have long complained about what was happening at city hall, and they welcomed FBI agents’ descending on the council members’ homes and offices. Saale said some residents cheered as agents searched city hall.

“From day one, I been hearing that they all involved in shady stuff,” said 38-year-old Eloy Vera Jr., a regular attendee of council meetings who wants to run for council himself. “People are just upset. They want them out.”

Known in some quarters as the “Spinach Capital of the World,” Crystal City erected a statue of the cartoon character Popeye outside city hall, and residents talk fondly of the festival held every year in honor of the vegetable. Many residents, who are predominantly Hispanic, work in the oil fields, the Del Monte plant or the school system.

Corruption, of course, exists in big cities across the country, too, and Richard Durbin, the U.S. attorney for the Western District of Texas, said the dollar amounts involved in Texas cases are often minuscule by comparison. But Durbin said his office prosecutes even small-town officials because, unchecked, their misconduct can become “pervasive” and have real-life impacts on the people who elect them.

“It undermines the fabric of what we all believe good government is, and that’s what’s so frustrating about it,” he said.

Under normal circumstances, Crystal City is governed by five council members, including the mayor and mayor pro tem, who have council votes. Prosecutors charged one of them, Marco Rodriguez, in January with transporting illegal immigrants. They alleged in an affidavit that he admitted charging fees of $500 and $1,400 for trips to San Antonio. In February, they charged three more, as well as a former councilman and the city’s manager, with a range of corrupt dealings. Two – mayor Ricardo Lopez and councilman Roel Mata – have resigned, although the other two are facing the recall bid and the city manager has been suspended indefinitely.

Barajas, 55, the councilman not facing federal charges, said he suspected malfeasance when he ran for office in 2015, but he did not know the scope. Had he lost, the entire Crystal City legislature might have been facing federal charges. Barajas’s opponent, Gilbert Urrabazo, 45, who is running for a county commissioner seat, was also among those charged.

“I don’t know how it got to that, but it got there, and I think one of the main reasons is we had people that used their position for bad,” Barajas said. “I just pray for the rest of the councilmen.”

In a 14-page indictment, federal authorities alleged Lopez, 40, and Crystal City’s manager, 54-year-old William James Jonas III, helped a man named Ngoc Tri Nguyen set up illegal gambling parlors in the city by waiving some tax payments, making sure Nguyen passed inspections and working to shut down a competitor. In exchange, federal authorities alleged, Nguyen, 38, who is known around town by the moniker “Mr. T,” gave Lopez $6,000 to buy a vehicle.

Maria Rivera, 67, a former councilwoman and mayor, said Jonas revoked her permit to operate a legal gambling-machine business that gave out prizes instead of cash in the fall of 2015, and he offered no explanation.

“They were trying to eliminate all of them, so he would be the only one,” Rivera said.

Federal authorities also alleged Jonas took $7,791 from a contractor to direct work that contractor’s way, while several other current and former council members – Rogelio Mata, 43, and Roel Mata, 44, along with Urrabazo – took a total of $4,500. In a separate instance, federal authorities alleged, Jonas told a contractor to hire an attorney to negotiate with the city, then asked the attorney to secretly give him a portion of the fee the contractor was paying.

Federal authorities alleged the men also approved a lucrative, controversial salary of more than $200,000 for Jonas, who doubled as the city’s attorney, because of Jonas’s work soliciting bribes. It remains unclear what sparked the probe, but officials familiar with the case said the FBI had been investigating for at least three years.

The federal charges were in some ways just the beginning of Crystal City’s problems.

The next day, the water turned black in some parts of the city – a problem Wastewater Superintendent Carlos Ramirez said was caused when a years-overdue cleaning of a water tank inadvertently sent sediments pumping through the system. Ramirez said workers have flushed it, and state and city tests showed the water is safe.

Sitting on a rusted swinging porch on his front lawn, Lopez, the now-resigned mayor, said the city “has been corrupted for many years” and his former colleagues on the council “do not understand a conflict of interest.” He declined to discuss the federal charges in detail. “If I did something wrong, it will be in a court of law to prove that,” he said.

Lopez said he would run again for mayor in May and, eventually, lieutenant governor or governor.

“Because these little towns,” he said, “they need help.”

What will happen next in Crystal City, which has a general fund of about $3 million, is largely unclear. Lawyer Javier Villalobos, who is representing residents in the recall bid, said if council members disobey the judge’s order to schedule a recall election, “I’ll be there probably Wednesday morning and filing a contempt and trying to put them in jail.”

No provision in Texas law allows the state to take over Crystal City’s government, said Bennett Sandlin, executive director of the Texas Municipal League, an organization that represents cities in Texas, including Crystal City.

“There’s literally no solution,” Sandlin said, adding that other cities have also had problems producing a quorum. “You just have to wait until the next election fills the vacancy.”